In 2005, the Rochester, New York, metropolitan area entered non-attainment for ozone and ozone precursors. This dubious distinction made the area eligible for funding from the U.S. Department of Transportation Congestion Mitigation and Air Quality Improvement (CMAQ) program, which focuses on making transportation more economically and environmentally sustainable.

Like the U.S. Department of Energy's Clean Cities program, the CMAQ program works through local organizations, such as state departments of transportation and metropolitan planning organizations (MPOs) to implement projects. Clean Cities coalitions1 are well-qualified to lead or assist CMAQ projects because they already work in collaboration with MPOs to deploy alternative fuel vehicles and fueling infrastructure that can help meet air quality goals.

The Genesee Transportation Council (GTC), the Rochester area's MPO, released a solicitation in 2006 that included CMAQ funds. Genesee Region Clean Communities (GRCC), a Clean Cities coalition, applied for and was awarded $2 million for an AFV program that reimbursed 75% of the incremental costs of new AFVs or AFV conversions. This CMAQ-funded initiative supported the deployment of 62 compressed natural gas (CNG) and propane vehicles in municipal and private fleets that are reducing carbon monoxide (CO) by 1,974 kg/yr, volatile organic compounds (VOCs) by 314 kg/yr, and nitrogen oxides (NOx) by 843 kg/yr. The vehicles include refuse trucks, street sweepers, pickup trucks, cargo vans, and sedans.

GRCC was a natural partner for the AFV project because the coalition had already brought together key stakeholders in the Rochester area to promote alternative fuels and advanced technology vehicles. David Keefe, GRCC's coordinator, had prior experience preparing AFV studies for fleets and also served as the director of fleet services for the City of Rochester. GTC is a founding stakeholder of GRCC and an enthusiastic supporter of AFVs. GRCC also has a longstanding relationship with the New York State Energy Research and Development Authority (NYSERDA) and partnered with NYSERDA as the contracting entity for this funding.

"It's a common sense approach to partner with Clean Cities coalitions," said Rich Perrin, GTC's executive director. "They have the experience, contacts, and passion to ensure this program is effective and advances our mutual goals. I would recommend other MPOs work closely with their local Clean Cities coalitions and consider this funding model."

After GTC selected the alternative fuel program, New York State Department of Transportation (NYSDOT) conducted a completeness determination on the program to ensure it would meet the Federal Highway Administration's (FHWA) CMAQ requirements. GRCC drafted a description of the program that included estimates of the kinds of vehicles for which it anticipated funding (e.g., light-, medium-, or heavy-duty) that could be used to calculate emissions. GTC used an NYSDOT-commissioned CMAQtraq 2008 tool to calculate the emissions benefits of these AFVs. This tool is based on the U.S. Environmental Protection Agency's MOBILE 6.2 software. After the GTC board gave final approval of recipients and specific vehicles, it recalculated the emissions benefits with the actual vehicles to replace the estimates.

First Round of Funding

Because CMAQ was new in the Rochester area, it took a few years to coordinate the completeness determination, select a public agency sponsor, obtain a partial Buy America2 waiver, and establish necessary contracts. FHWA granted the project a Buy America partial waiver because no vehicle is composed of 100% domestically produced steel and iron. However, to fulfill other Buy America requirements, the vehicles were assembled in the United States. As a new program, GTC chose to provide approximately half of the awarded funding for a first round of projects. After the solicitation process, $850,000 was approved for the deployment of 23 CNG vehicles and 39 propane vehicles. The City of Rochester, Monroe County, Suburban Disposal, Casella Waste, and Halco received their vehicles during the summer of 2014. The first round of funding was a success, so GRCC will manage a second round of funding with the remaining CMAQ money. In addition to the vehicles funding, GRCC and NYSERDA received a combined $90,000 for administration costs to manage the first round.

As part of a national network of Clean Cities coalitions, GRCC had the benefit of following the example set forth by the Greater Long Island Clean Cities Coalition (GLICCC). The New York Metropolitan Transportation Council (NYMTC) is the MPO for New York City, Long Island, and the lower Hudson Valley. When NYMTC has unspent CMAQ funding, it turns to GLICCC to find and manage AFV projects. Partnering with NYSERDA, GLICCC has managed more than $10 million of CMAQ funding, which has supported the deployment of E85 stations, CNG stations, and CNG vehicles.

1 Nearly 100 Clean Cities coalitions around the country work with their local communities. View the map to find your local coalition.

2 Buy America is a Federal Highway Administration requirement that U.S. Department of Transportation–funded projects use domestically produced steel and iron. 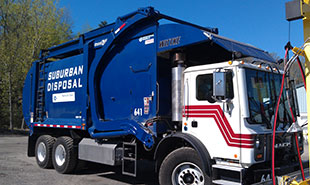 Project at a Glance
Location: Rochester, New York
Timeframe: Projects selected in 2013, vehicles acquired in 2014
Funding amount: $850,000 for vehicles and $90,000 for administration
Technology: CNG vehicles and propane vehicles
Fleet type: Municipal vehicles, including refuse trucks, street sweepers, pickup trucks, cargo vans, and sedans
Number of vehicles: 62 CNG and propane vehicles
Targeted pollutants: Ozone and ozone precursors
Emissions reduction (kg/yr):
Cost/emission reduction (annual $/kg):
Related Links
Rochester's Process for Selecting Vehicles and Awarding Recipients
Step 1: Request for proposals
GRCC released a request for proposals in December 2012 and held informational workshops to educate interested stakeholders about the application process and requirements. GRCC restricted applications to a $200,000 funding request and required a 25% contribution to the incremental vehicle cost.
Step 2: Technical evaluation panel
A technical evaluation panel, including Keefe, GRCC stakeholders, and representatives from NYSERDA, GTC, and NYSDOT, ranked and evaluated the proposals based on their estimated air quality benefits, proximity to fueling infrastructure, feasibility, visibility, and geographic distribution. The panel sent the strongest projects to the GTC board for final approval, and awardees were selected in spring 2013.
Step 3: Verification visit
Once the vehicles arrived or the conversions were completed, GRCC conducted a verification visit to take pictures and document the vehicles.
Step 4: Submission of invoices
The recipients submitted invoices to NYSERDA, which submitted invoices to NYSDOT. NYSDOT reimbursed the recipients.
×