This is a text version of the video segment California School District Creates First-of-Its-Kind Zero-Emissions Bus, which aired on Dec. 20, 2014.

JOHN DAVIS: Our success story this week takes us to California's Gilroy Unified School District and a first of its kind "zero emissions squared" school bus project. Using a team of companies including Adomani Electric, they converted a diesel school bus to electric power where solar panels will be used to help charge it up. With a payback of only 6 years, this approach could cut operating costs for school bus fleets nationwide.

BOB GARZEE: That bus that we're riding on is equivalent to 57 to 84 mothers or fathers driving and taking their kids to school in the morning and picking them up at night.

JOHN DAVIS: The Silicon Valley Clean Cities coalition has also placed 57 THINK EV cars in Bay Area cities. They were a Gold Sponsor of the world's largest gathering of electric vehicles where 507 EVs paraded down the streets of Cupertino, California, to set a Guinness World Record. Now that's electrifying. 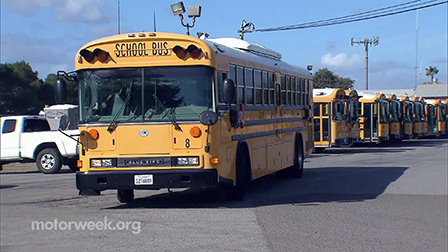