This is a text version of the video segment Connecticut Utility Fleet Operates Vehicles on Alternative Fuels, which aired on Oct. 30, 2010.

JOHN DAVIS: Our success story of the week takes us to Connecticut, where Norwich Public Utilities has assembled the largest municipal fleet of natural gas vehicles in the state. NPU has been using alternative fuels since 1995.

Today, they operate 33 CNG vehicles like this sewer jet used to clean out sewer lines. NPU also has a hybrid electric bucket truck, two hybrid SUVs, and 15 biodiesel vehicles like this mini excavator and dump truck. They fill up at their new B20 refueling station built with the help of a federal grant from the Department of Energy.

JOHN BILDA: Wherever there's a vehicle and we can match that vehicle up with a compressed natural gas or an alternative fuel source, we're just simply expanding the fleet in that direction.

JOHN DAVIS: Federal funding will also be used to transform this lot with 10 EV charging stations right next to a public CNG refueling station that's helping to make the Rose of New England a sweet-smelling, cleaner, greener city. 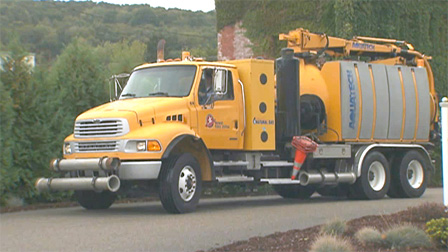