If we can save the district money and prevent pollution for our kids' sake in the process, I don't see a reason to turn back.

It might seem that multi-billion dollar companies and local school districts share few business interests, but organizations large and small are faced with the challenges of stretching budgets and making their fleets "greener." Now, more and more are finding that propane helps them accomplish both goals.

Also known as liquefied petroleum gas (LPG), propane as a transportation fuel has roots that go back nearly a century. In recent years, however, its reputation as a top fuel pick for fleets has gained traction. This is largely because of fuel injection system advancements and more vehicle options available in the marketplace.

"In my previous position as the fleet manager for Cherry Creek Schools, also in Colorado, we developed an alternative fuels program for our buses as a way to save money and clean up the air and environment for our students. When I arrived at Adams 12, we wanted to start a similar project," Anderson said. "Our first purchase was a diesel hybrid bus, and it was very successful. So, when Blue Bird came out with a propane-powered bus, everyone agreed that it was something we should try."

Anderson said the final decision for choosing propane came down to the infrastructure costs.

"We evaluated costs and found that we could install our entire propane station infrastructure, including a card reader system, for less than $50,000."

In 2011, Anderson secured three buses and in 2012, nine more. As of August 2014, the buses have traveled 191,000 miles, averaging about five miles per gallon. Although propane buses typically experience about a 10% decrease in fuel economy compared to conventional buses, Anderson found that propane's lower fuel cost easily offset the fuel economy loss. In addition to these savings, Anderson notes that the buses have had lower maintenance costs and have become a favorite among bus drivers and the district alike. Spurred by the success of the pilot project, Anderson wants to secure funding for an additional 10 propane buses this year.

The fact that hundreds of school bus fleets have chosen propane is a testament to how successful it's been in this particular niche. A case study recently released by Argonne National Laboratory examined five fleets (a total of 110 buses) and found that some of the school districts saved nearly 50% on fuel and maintenance and recouped the incremental costs of the vehicles and infrastructure within three to eight years.

One added benefit that all fleet managers and drivers can appreciate is propane's cold-weather performance. Because the fuel is more easily vaporized at low temperatures, propane-fueled vehicles are able to avoid the cold-start problems inherent with traditional liquid fuels.

This is not to say that propane is only a good fit for school bus fleets, or that it's a new option. In fact, one Clean Cities partner traces its interest in propane back to the oil crisis of the 1970s. When the Middle East oil embargo resulted in long lines at gas stations across the United States, Schwan's Home Service (a National Clean Fleets Partner) began using propane in its home-delivery vehicles. Because of this early success, Schwan's has continued its commitment and has become one of the country's biggest proponents of using propane-fueled vehicles. Today, Schwan's operates 3,300 propane delivery trucks nationwide. Part of the company's success has come through eliminating price risk via fuel cost hedging, a practice that allows the company to lock in propane prices for months at a time. This has resulted in an estimated annual savings of $30 million.

According to the Alternative Fuels Data Center (AFDC) website, there are more than 3,000 propane stations in the United States.

Propane infrastructure can also be relatively straightforward to install and operate. However, the cost to install a fueling station can vary widely depending on several variables. To get a better understanding of the variables and typical installation costs, see the document, Costs Associated With Propane Vehicle Fueling Infrastructure. Fleets can stabilize their fuel costs through long-term contracts with a fuel provider. However, it's important to plan ahead and negotiate these agreements in advance to avoid price fluctuations and ensure fuel availability.

A Bright Future for Propane

Propane's newfound momentum is apparent in many sectors. In 2013, Clean Cities coalitions and their stakeholders reported 36,000 propane vehicles—a 115% percent increase over 2012. The numbers clearly indicate the fuel's rapid pace of adoption.

Larger market trends are also encouraging, but you don't have to spout data to convince the Adams 12 School District that its propane-fueled fleet is a wise investment for the future. The district has already seen the benefits first-hand.

"The propane-powered buses save us about $2 a gallon over our diesel buses and already run at the lowest cost per mile in our fleet," Anderson said. "If we can save the district money and prevent pollution for our kids' sake in the process, I don't see a reason to turn back."

For more information on greening your fleet with propane, refer to the AFDC case studies or the PERC case studies. Contact your local Clean Cities coordinator to learn more about Clean Cities activities in your area. 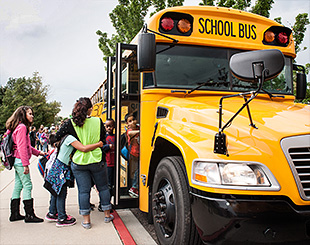