The fuel savings technologies that Braun's has researched and ad?opted under the leadership of Stephen Normandin are an excellent example of how a fleet can significantly reduce petroleum consumption.

Braun's Director of Strategic Initiatives, Stephen Normandin, and his team have left no stone unturned when it comes to fuel efficiency. Since 2004, the fleet has implemented a variety of technologies and strategies, including idle reduction, hybrid electric vehicles (HEVs), telematics, and driver training. These strategies have increased overall fuel economy by an estimated 1 mile per gallon (MPG) across Braun's 185 tractor fleet. This equates to 1,500 gallons of fuel and $6,000 saved per truck per year, and more than 10,700 tons of carbon dioxide (CO2) emissions avoided annually across the fleet.

To ensure efficiency, Braun's purchases SmartWay-certified tractors and trailers. The fleet upfits each vehicle with select technologies, depending on its primary use and location. While Braun's is always willing to try new approaches, the highest priority is demonstrated payback period, followed by overall cost of the equipment and ease of maintenance and repair.

Headquartered in Hopedale, Massachusetts, Braun's operates up and down the U.S. East Coast. One of Braun's primary trucking routes is between their Georgia and Massachusetts warehouses. Along the way, the company has four terminals where drivers can stop to load and unload products and satisfy their mandatory rest periods. The 60 sleeper-cab trucks that travel along this route are equipped with IdleFree battery-powered auxiliary power units (APUs), which allow drivers to have heated and cooled air and other comforts, such as electricity for laptop computers, without running the vehicle's engine.

For power, the trucks can plug in to electrified parking spaces (EPS) installed at the company's terminals and one additional rest stop along the route. According to data Braun's has collected, the APUs improve overall fuel economy from 5.87 MPG to 6.75 MPG and have a payback period of less than one year. In addition, the promise of added comfort in the cab helps the company recruit and retain top drivers.

Through its involvement with Massachusetts Clean Cities, Braun's connected with HDM Systems, a company that manufactures advanced power electronics for battery applications. The fleet installed this system in two trucks to extend the life of battery-powered APUs. Using Massachusetts Clean Cities to make a connection with a local equipment provider, Braun's then installed SBM Solar's proprietary solar equipment on the same two trailers' roof fairings to provide additional auxiliary power. Normandin estimates that the energy collected by the solar technology alone provides air conditioning for six to eight hours, depending on the weather. All 185 of the fleet's tractors are also equipped with automatic shutdown technology to prevent the vehicles from idling for long periods.

"The fuel savings technologies that Braun's has researched and adopted under the leadership of Stephen Normandin are an excellent example of how a fleet can significantly reduce petroleum consumption," Massachusetts Clean Cities Coordinator Steve Russell said. "As a Clean Cities stakeholder, Braun's is a leader in staying on top of the latest technologies."

Technologies that improve a vehicle's aerodynamics can provide significant fuel economy improvements. Braun's has demonstrated this through the use of aerodynamic bumpers and mirrors, truck cab extenders, tractor side skirts, slotted mudflaps, and extensions on the rear of the trailer. In addition, the fleet uses wide-base tires, sometimes called super singles, and automatic tire inflation systems to ensure efficiency. All of the fleet's trucks have at least one of these technologies on board.

Telematics: The Key to Driver Education

Given Braun's significant investment in fuel-efficient technologies, it was important for Normandin and the fleet team to be able to track improvements and ensure that driver behavior changes complement the technology. Braun's selected PeopleNet's PerformX driver and vehicle evaluation tool for this purpose and uses the technology to track overall fuel economy, speed, and idle times. The result is a scorecard that ranks drivers by their fuel economy performance.

"Finding out the real total cost of ownership and the real return on investment of each strategy is the biggest challenge," Normandin said. "Manufacturers and salespeople give you theoretical or ideal numbers, but they rarely factor in things like expected maintenance costs. It is important to use onboard computers like PeopleNet to collect data and factor in all costs to make sure you are basing your decisions on real-world data."

Braun's makes the information provided through telematics available to drivers, showing each how they compare to their peers. This data helps motivate drivers to be more efficient. The fleet also holds periodic driver training and plans to increase the frequency of these trainings in the future. Braun's also plans to roll out a fuel economy bonus program for its drivers.

Earning Accolades and Educating Others

"Clean Cities was a big part of my early exploration into petroleum reduction technologies. By attending Clean Cities meetings I learned a lot about what is available to companies like ours," Normandin said.

As the company explores additional petroleum reduction strategies in the future, it will continue to work with Clean Cities to learn and make these connections. 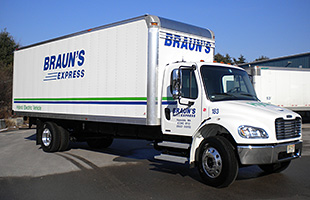