As part of a multi-coalition American Recovery and Reinvestment Act award, Clean Communities of Central New York (CC of CNY) managed the 2010 development of a compressed natural gas (CNG) fueling station in North Syracuse, New York. Owned by National Grid and operated by Clean Energy, the station has become a big success by providing a public fast-fill dispenser, a private fast-fill dispenser, and 25 private time-fill posts.

For the first three years, the station saw few customers beyond National Grid's own CNG fleet. The number of users picked up in 2013, thanks to CC of CNY support and event assistance from the New York State Energy Research and Development Authority.

CC of CNY Coordinator Barry Carr and Program Manager Amy DeJohn helped publicize the station and the availability of CNG vehicles to public and private fleet managers in the area. In addition to holding a series of individual meetings, the dynamic duo hosted several public outreach events at the Center of Excellence at Syracuse University, a Clean Cities stakeholder. As a result, the number of public users at the station grew by about 20% in 2013, and last spring the station landed its largest user to date--Ultimate Transit.

Ultimate Transit recently placed six CNG transit buses in service on behalf of Syracuse University. Under contract for five years, the buses move students between "the hill" and downtown campuses (via what is known as the "connective corridor"). They also transport athletes to and from housing, practice centers, and events.

"In addition to boosting the volume of fuel used at the station, the Ultimate Transit buses promise to displace a significant amount of petroleum in the coming years and to demonstrate high-quality, clean, economical transportation to the general public," Carr said. "Ultimate Transit has agreed to let CC of CNY promote the use of alternative fuels on the side of one of the buses."

CC of CNY was also creative in reaching out to both fleets and the public. Recently, the coalition spon-sored a night of AAA baseball with the Syracuse Chiefs, a minor league affiliate of the Washington Nationals. More than 50 stakeholders came to the game and cheered Carr's 45 mile-per-hour first pitch. After the impressive knuckleball, Carr spoke directly to the crowd about the benefits of using alternative fuels and vehicles, and about the resources available through the Clean Cities program. 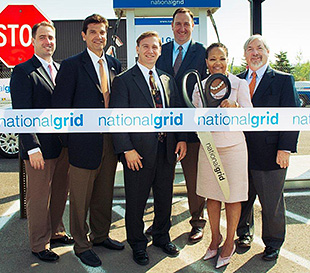