This is a text version of the video segment Sacramento Adds Regional Heavy-Duty LNG Fueling Station, which aired on March 21, 2015.

JOHN DAVIS: Our success story this week takes us to West Sacramento, California, where truckers are taking advantage of a new, Clean Energy, liquefied natural gas fueling station. It's one of only two regional LNG stations designed for heavy-duty, class 7 & 8 tractor trailers. Stations have wider access, a larger turnaround pad, with two fueling lanes that can be increased to four. The station can also be upgraded to add CNG–and if demand warrants, a second LNG holding tank. Area haulers are slowly but surely making the switch to the cleaner-burning fuel, supporting the need for more LNG stations.

JEFF WITTENBERGER: Sacramento has been an early adopter for natural gas trucks. A lot of the county and city of Sacramento vehicles are running on natural gas. It's nothing new here. What is new is the introduction to the heavy duty, over-the-road, and regional haul trucking market. 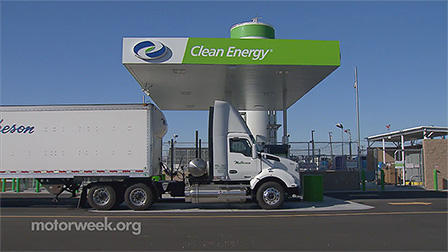