This is a text version of the video segment Sacramento Powers up with Electric Vehicles, which aired on Oct. 3, 2016.

JOHN DAVIS: Our success story this week takes us to Sacramento, the state capital of California. Since 2011, the city's department of general services has included electric and plug-in hybrids in their fleet—now totaling close to 60 vehicles. They use motor pool level-two chargers that partially rely on solar power, while an additional charging station is for employees' personal vehicles. The city is also trying out a plugless battery charger to see if this wireless technology is ready for deployment. Officials hope their alt-fuel efforts will encourage others to follow suit.

STEPHEN BARKER: Anything we can do to increase the hybrid vehicles on the road—the alt-fuel vehicles—is good for us and the citizens of Sacramento. 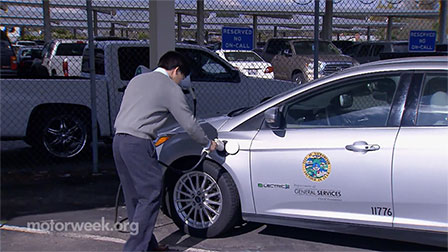