We believe business leaders should be environmental leaders, too. That's why H&S Bakery adopted a social responsibility and environmental policy that has led to some dramatic changes in the way we work and use the earth's resources.

"After considerable research, we chose propane because it's environmentally friendly and cost-effective," said Chuck Paterakis, vice president of transportation and logistics for H&S Bakery. "We want our customers and community members to know that we are investing in them and working hard to achieve our sustainability goals. Propane is a domestically produced fuel that will lower emissions across our delivery area."

Paterakis estimates that the propane-powered fleet will significantly reduce emissions compared to the older gasoline and diesel vehicles they are replacing.

"In addition to reducing emissions, we found that propane would reduce maintenance costs and save us money on fuel compared to diesel and gasoline," Paterakis added. "Our price for propane is around $1.36 per gallon, including tax, and offers a comparable driving range to conventional fuel. Plus, state and federal grants were available, which provided further incentive."

H&S Bakery tapped into funding from the Maryland Freedom Fleet Voucher Program with help from Chris Rice, coordinator of the State of Maryland Clean Cities coalition and manager of transportation programs at the Maryland Energy Administration. Rice works with fleets, fuel distributors, engine manufacturers, and fuel producers to increase the use of alternative fuels in the state.

"Launched in 2013, the voucher program provides financial assistance for the purchase of new and converted alternative fuel vehicles registered in Maryland," Rice said. In this case, the bakery received funding to cover part of the trucks' incremental cost—the added expense of buying an alternative fuel vehicle versus a similar conventional vehicle.

"H&S Bakery provides an excellent example for other commercial fleets interested in exploring their alternative fuel options," he added.

Leading the Pack in Sustainability Efforts

H&S Bakery knew that wasting time, money, and fuel was not in the company's best interest. That's why their vehicles fill up at the company's new propane fueling station, which features an 18,000-gallon underground propane tank.

The station is adjacent to the company's new eco-friendly distribution depot, which earned two "green stars" from Baltimore's Green Building Standards Program. The depot, located in east Baltimore, is one of seven that the company operates in the Mid-Atlantic region.

"We believe business leaders should be environmental leaders, too," said Paterakis, whose grandfather founded the company in 1943. "That's why H&S Bakery adopted a social responsibility and environmental policy that has led to some dramatic changes in the way we work and use the earth's resources."

Over the next two years, the company aims to operate about 20% of its 600- vehicle fleet on propane. However, that's just part of the overall plan. In addition to reducing emissions and improving air quality, the company's green initiatives focus on reducing waste and conserving electricity, water, and gas. 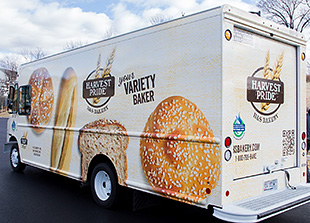