We realized we needed to get the dealers really excited and invested in selling EVs in general if we want to see this market continue to grow and move beyond the early adopters.

As an urban planner by trade, Coordinator Kevin Wood is skilled at finding ways to turn grand visions into reality. Wood, who has helmed the San Diego Regional Clean Cities coalition (SDRCC) since 2012, is now playing a role in shaping the electric vehicle (EV) revolution that has been sweeping his home state as well as the nation.

"We've been able to make a lot of progress in California," Wood said. "So far, we've been able to deploy more than 100,000 EVs statewide, and there have been thousands of new charging stations installed. The state has also invested hundreds of millions of dollars in incentive funding for vehicles, infrastructure, and planning activities—we've been very fortunate."

Closer to home, SDRCC and its parent organization, the Center for Sustainable Energy (CSE), have taken a unique approach to igniting interest in plug-in electric vehicles (PEVs). In late 2013, Wood helped spearhead the PEV Dealership Outreach & Education Program, which provides dealers in the San Diego area with training and informational materials to reference and hand out to consumers. The program grew out of a larger statewide effort administered by the CSE, called the Clean Vehicle Rebate Project, which offers EV rebates for the purchase or lease of new, eligible zero-emission and plug-in hybrid electric light-duty vehicles.

"When we reached out to dealers about the rebate program, we found many were more likely to talk someone out of buying a PEV instead of talking people into buying one," Wood said. "Because PEVs are still a relatively new technology, many salespeople weren't confident about selling these vehicles.

"We realized we needed to get the dealers really excited and invested in selling EVs in general if we want to see this market continue to grow and move beyond the early adopters."

Enter the dealer outreach program. Now more than a year and a half in operation, Wood said the program has successfully connected with more than 50 local dealers and their salespeople and supplied them with thousands of the SDRCC's educational brochures. The brochure outlines everything from the basics of PEVs to what rebates and incentives are available for buyers and information about how utility rates are determined.

"While we learned that it takes a lot of effort to work with dealers, in the end it's worth it," Wood said. "Dealers are the ones interacting with consumers every day, so it's extremely important that they are armed with the best and most accurate information. We've heard from numerous dealers that the information has been very useful and has even helped them sell more of these vehicles."

Yet the EV push won't stop there. In the coming year, Wood plans to expand his coalition's efforts with funding from a recent $300,000 California Energy Commission grant to continue dealer education. The grant will also boost outreach to more municipalities in regards to zoning changes and planning for future EV infrastructure. Add to that his initiative to compile EV lessons learned and resources for fellow coalitions (as part of his role on the Clean Cities Coordinator Council), and Wood will have his plate full for the next few years at least.

It's all in a day's work for the energized coordinator.

"The most rewarding part of my job comes when I walk away from a conversation knowing I've not only provided someone with good information, but maybe influenced their decision to purchase an alternative fuel vehicle," Wood said. "Then when I actually see those vehicles on the road, I feel proud knowing I may have played some part in putting them there." 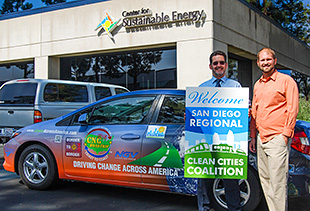