We have always been proponents of alternative fuel vehicles, and adding this retail propane station is proof that we believe propane is a viable fleet fuel. When you combine the cost savings with the reduction in emissions, you can't beat the benefits that propane offers.

When news about a propane-related funding opportunity arrived in the inbox of Granite State Clean Cities Coordinator Dolores Rebolledo in early 2013, she forwarded it to her stakeholders across New Hampshire. Alternative fuel enthusiast Joe McCarthy of Patsy's Bus Sales was quick to respond and by December of that year, the company celebrated the grand opening of its new propane station. Located in Concord, the state-of-the-art fueling station is now open to the public 24 hours a day, seven days a week.

"Sadly, Joe McCarthy passed away last year, but not before putting Patsy's at the forefront of alternative vehicle fueling in the state," Rebolledo said. "Since that snowy December day when we celebrated the station opening, another company has installed the same type of dispenser. Now propane accounts for nearly half of the alternative fuel use in the state."

The process of getting the station up and running was not without hurdles, however. Joe Alosa, Patsy's owner and president, shepherded it through the process with help from Rebolledo.

Although Alosa was new to the process, Rebolledo said he soon became the go-to authority on what is needed to open a propane fueling station.

"He now receives several help requests each month from others wanting to install such stations," she added.

"We have always been proponents of alternative fuel vehicles, and adding this retail propane station is proof that we believe propane is a viable fleet fuel," said Alosa. "When you combine the cost savings with the reduction in emissions, you can't beat the benefits that propane offers."

The project was made possible through a partnership between Patsy's Bus Sales and CleanFUEL USA, a manufacturer of propane dispensers. An American Recovery and Reinvestment Act grant, made available through the U.S. Department of Energy, provided funds for the project, which included establishing networks of propane fueling stations.

"We were able to make this project a success thanks in no small part to Joe McCarthy's unyielding efforts to promote alternative fuels," Rebolledo added. 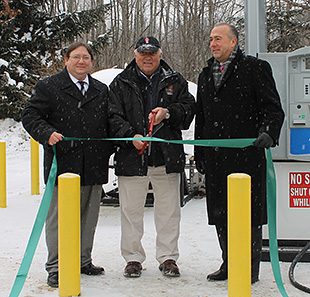