The installations will help KCP&L learn how EVs can enable additional customer programs for energy efficiency, demand response, distributed generation, and renewables.With so many stations located throughout the region, KCP&L will virtually eliminate so-called range anxiety, which prevents many people from purchasing EVs.

Placed in areas where clusters of EV owners live and work, the charging stations will be free to users for the first two years. This is thanks to partnerships with companies at host locations as well as with Nissan Motor Company.

Workplace charging has also been crucial to bolstering the Clean Charge Network, and the KCRCC has played a key role in the effort. The coalition has recruited interested employers through educational EV ride-and-drive events and regularly promotes the Workplace Charging Challenge, a nationwide U.S. Department of Energy initiative encouraging employers to provide EV charging at their worksites.

"In 2011, we worked with KCP&L to bring the first 10 charging stations to the metro area," said Kelly Gilbert, transportation director for the Metropolitan Energy Center and co-coordinator of KCRCC. "Then the utility deployed additional stations through its SmartGrid Demonstration Project. These pilot deployments provided the opportunity to test technologies and behaviors while monitoring usage and laying the foundation for the Clean Charge Network."

Gilbert added that a key factor in building such a sizeable network--capable of supporting more than 10,000 EV owners--is KCP&L's strong belief in energy efficiency and sustainability.

"The installations will help KCP&L learn how EVs can enable additional customer programs for energy efficiency, demand response, distributed generation, and renewables," she said. "With so many stations located throughout the region, KCP&L will virtually eliminate so-called range anxiety, which prevents many people from purchasing EVs."

To launch this ambitious project, KCP&L called on its foundational work and partnerships with Edison Electric Institute, Electric Power Research Institute, KCRCC, and its own Smart Grid project. It also relied on input and support from a broad range of stakeholders, including the regional business community, economic development groups, elected officials and agencies, environmental groups, and numerous automobile manufacturers.

Based in Kansas City, KCP&L services more than 800,000 customers in 47 northwestern Missouri and eastern Kansas counties. 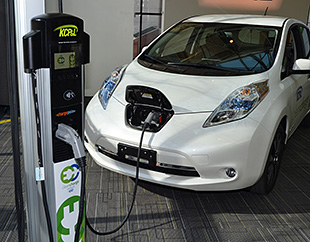