This is a text version of the video segment Coca-Cola Continues to Expand Its Heavy-Duty Hybrid Fleet in Atlanta, which aired on Oct. 31, 2015.

JOHN DAVIS: Our success story this week profiles a big name in beverage and its ever-growing hybrid electric fleet. In fact, this hybrid van just arrived at Coca-Cola's North Metro Atlanta distribution center. With the largest heavy-duty hybrid fleet in North America, Coca-Cola now operates over 1,000 alt-fuel and advanced technology vehicles, including compressed natural gas, liquefied natural gas, all-electric, and fuel cell vehicles. While only 5% of their total fleet, Coca-Cola finds they are already having a big impact on reducing carbon emissions and noise pollution.

STEFAN FREEMAN: When you look at Coca-Cola as a whole, what you'll constantly see is great commitment to the environment and not only in the alternative fuel space but also in other efforts that we have around sustainability as a whole.

JOHN DAVIS: A National Clean Fleets partner with the Department of Energy, Coca-Cola plans 50 more hybrid electric customer-care vans for Atlanta alone, a move that will build on the global company's accomplishments in the alt-fuel and advanced technology arena. 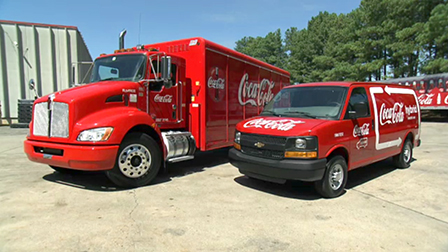