Fast forward from 2009 to today and you'll see a very different EV landscape. As of July 2015, more than 1,000 Massachusetts residents have secured rebates through the Department of Energy Resources' Massachusetts Offers Rebates for Electric Vehicles Program, dubbed MOR-EV, which offers up to $2,500 to state residents who buy or lease EVs.

"Nissan approached us in late 2009 when it deemed Massachusetts an EV-friendly state due to the large number of hybrid electric vehicle registrations per capita," Russell said. "Six months later, we sponsored a stakeholder meeting, including representatives from Nissan and a few charging station companies, and opened the meeting to anyone interested in learning about electric vehicles. Attendance was staggering—more than 300 people participated, many of whom took advantage of the opportunity to test drive an electric vehicle for the first time."

Soon after, representatives from the state, along with a group of MCCC stakeholders, formed a task force to spur the region's budding EV market. The task force set out to secure funding for consumer rebates and to increase public acceptance via EV ride-and-drive events at workplaces across the state. The effort didn't stop there, however. The forward-thinking team went on to develop a plan designed to put 300,000 zero-emission vehicles (ZEVs) on Massachusetts roadways by 2025. This mandate is part of a broader effort also happening in California, Connecticut, Maine, Maryland, New Jersey, New York, Oregon, Rhode Island, and Vermont, which will require 15% of new vehicles sold within their borders by 2025 be ZEVs—about 4 million vehicles in about 11 years. "Fast forward from 2009 to today and you'll see a very different EV landscape," Russell added. "As of July 2015, more than 1,000 Massachusetts residents have secured rebates through DOER's Massachusetts Offers Rebates for Electric Vehicles Program, dubbed MOR-EV, which offers up to $2,500 to state residents who buy or lease EVs."

Russell noted that a total of $3.72 million is available to MOR-EV to increase the number of EVs on the road.

MCCC has also partnered with the U.S. Department of Energy's Workplace Charging Challenge initiative to promote charging in the workplace and increase the convenience and affordability of driving electric. While many EV owners primarily charge their vehicles at home, Russell said that having access to chargers at work can nearly double a driver's all-electric daily commuting range. 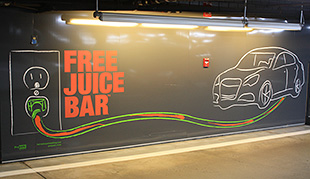