Alternative Fuel Vehicles Beat the Heat, Fight the Freeze, and Conquer the Mountains

Based on what we heard from fleets who tried CNG in the past, we expected a fuel economy penalty, but instead we saw a significant improvement in fuel economy over the [older] conventional buses. In fact, the CNG buses run as well as their diesel predecessors and provide the same torque and horsepower.

When thinking about buying an alternative fuel vehicle (AFV), it's natural to be concerned about how it might fare in the harshest landscapes and most brutal climates. Many AFVs are proving they can handle almost any extreme—from freezing conditions in the dead of winter, to substantial heat waves in the height of summer—with ease.

Up in the high terrain of the Colorado mountains, the Roaring Fork Transit Authority (RFTA) fleet navigates through snow, slick roads, and freezing temperatures four months of the year.

Its buses also have to deal with frequent steep ascents. When RFTA made the decision to implement the nation's first rural bus rapid transit system in 2013, it welcomed the opportunity to put compressed natural gas (CNG) to the test.

This wasn't the first time RFTA had expressed an interest in natural gas. An early pioneer in the market, RFTA had purchased its first CNG bus in 1989—which struggled with numerous maintenance issues and did not prove successful. The agency didn't let that deter them, however. In the late 1990s, RFTA worked with engine manufacturer Cummins to determine if their new CNG engines could work in its service territory. At the time, Cummins and RFTA decided conventional diesel was the best fuel for the job, citing hesitation about whether early CNG technology could perform in cold conditions because of the properties of pipeline natural gas in Colorado.

Almost 20 years later, RFTA decided it was ready to try again—this time, with new Cummins Westport engines designed for high altitude and low temperatures that were also more tolerant of the local natural gas composition. In just 18 months, the agency went from a blank drawing board to full-blown implementation of CNG. RFTA built a new CNG fueling station, made extensive facility modifications, developed necessary training for technicians and drivers, and pushed 22 new CNG buses into service before the end of 2013.

"Based on what we heard from fleets who tried CNG in the past, we expected a fuel economy penalty, but instead we saw a significant improvement in fuel economy over the [older] conventional buses," said Kenny Osier, RFTA's director of fleet maintenance. "In fact, the CNG buses run as well as their diesel predecessors and provide the same torque and horsepower."

To address operational challenges in the winter, RFTA also installed an indoor fast-fill CNG station and added engine block heaters to each bus.

Though RFTA invested more money than anticipated to build and ensure code compliance and safety for its indoor fueling facility, the agency has found the modifications to be worthwhile. With the indoor facility, the buses are able to warm to operating temperatures before encountering the winter weather.

In less than two and half years, RFTA's CNG buses have driven more than 3 million miles—a testament to the dependability of CNG in the transit industry and harsh conditions. Initial performance results indicated a substantial 25-cent savings per mile when compared to diesel. In its first 12 months of operation, the RFTA fleet reported that it had saved more than $362,100 in fuel costs and displaced more than 52,800 gallons of petroleum.

Natural gas vehicles (NGVs) can also thrive in cold weather freight applications. Convenience store chain Kwik Trip, a National Clean Fleets Partner (NCFP), operates in some of the coldest areas in the country, and has driven more than 20 million miles on natural gas. "We were looking for an alternative to diesel that would allow our vehicles to operate in the same climates, at an equal or lower price, without any major interruptions to service," said Carl Suhr, superintendent of fleet operations.

Kwik Trip's advice for other fleets looking into operating NGVs in cold conditions? Take extra care when refueling the vehicles from an empty tank. To reduce the risk of O-ring leakage, introduce natural gas to the tank gradually. Additionally, train technicians early and often.

"Operating NGVs in severe temperatures is no more problematic than operating diesel vehicles in the same conditions," Suhr said. "There are different problems that come with each fuel, but similar solutions."

For more natural gas maintenance and safety information, contact your local Clean Cities coordinator or visit the Natural Gas section on the AFDC.

Looking for a way to improve air quality and ensure reliability in its day-to-day operations, the City of Phoenix, Arizona, decided to give CNG a try in 2010. Today, the city has 55 CNG refuse trucks and is committed to an ongoing replacement schedule that promises to grow its CNG fleet.

To avoid issues with hot weather, Phoenix chose to install time-fill CNG stations. Time-fill made sense for the fleet, because as the rate of fueling increases, the temperature of CNG increases. When fuel warms up, it expands and becomes less energy dense. "With temperature swings from 60 to 115 degrees in summer, time-fill dispensers ensure that we are able to get more fuel per fill and extend vehicle range," said Gregg Duckett, Phoenix's public works operations manager.

Another key to Phoenix's success was the networking assistance they got from the local Clean Cities coalition. "Valley of the Sun Clean Cities brought us together with other fleets and industry experts and proved highly instrumental in our success," Duckett noted.

As an industry leader in sustainability and a member of the NCFP, ThyssenKrupp Elevator makes alternative fuels one of its main priorities. As of April 2015, ThyssenKrupp operated 85 propane vehicles nationwide, and in 2014, minimized its petroleum use with 158,000 gallons of propane.

Tom Armstrong, ThyssenKrupp's fleet director, encourages the widespread use of propane in his vehicles across the country. ThyssenKrupp has dedicated propane vehicles operating north to Vancouver, Washington, and propane vehicles operating as far south as Phoenix, Arizona. Armstrong says the vehicles run just as well as the company's conventional vehicles with no issues. For hotter climates, Armstrong recommends that fleets work with suppliers to install fuel tanks inside the vehicles to reduce tank exposure to extreme heat on the ground.

"Propane is completely feasible in all climates," he said. "With today's updated sequential fuel injection technology, we don't have any significant issues in extremely cold or hot weather. The onboard computer controls fuel injection and the new systems run seamlessly."

Custer Gallatin National Forest is doing its part to dispel the misconceptions about operating plug-in electric vehicles in freezing temperatures. Located on more than 3.1 million acres of forest in Montana and South Dakota, this national forest has successfully operated plug-in hybrid electric vehicles (PHEVs) since 2012.

Perhaps one of the most outspoken proponents of the vehicles is Michael Donch, fleet and safety manager at the Custer Gallatin National Forest.

"Despite warnings that the PHEVs would become 'garage queens' in the winter, we've proven the opposite," Donch explained. "Our vehicles are out every day, often in slick terrain and unruly weather, and we haven't noticed any difference in drivability between the PHEVs and our old conventional vehicles. On top of that, we're seeing about the same battery range in the winter as we are in the summer."

Other fleets have reported a slight decrease in PHEV battery range in colder months, though the extent of this impact depends on outside air temperature and drive cycle. When the Forest's five PHEVs are not in use, they are housed in a parking garage where they recharge overnight using Level 1 outlets powered by rooftop solar panels.

When it comes to using ethanol or biodiesel in low temperatures, misconceptions are a dime a dozen. Yet the truth is that many fleets in colder areas of the country report very few issues running biofuels throughout the year. These successes can be attributed to fleets carefully considering the right biofuel blend for their climate and ensuring they use the industry standard for biodiesel, American Society for Testing Materials (ASTM) D675 fuel.

"E85 is widely available in Minnesota, and represents roughly 15% of the total fuel used in our light-duty vehicles," said Paul Hanson, fleet director at the Minnesota Department of Administration. "While extreme temperatures are tough on any vehicle, we have not had issues using E85 in our fleet of about 1,625 flexible-fuel vehicles."

Biodiesel can also be used in cold temperatures, but like ethanol, small measures should be taken to prevent engine issues. Specifically, to prevent fuel from gelling when temperatures drop, fuel providers will often incorporate diesel with a cold weather additive. This keeps the cloud point of biodiesel low.

Stephen Russell, former fleet manager for the City of Keene, New Hampshire, and the current coordinator for Massachusetts Clean Cities, recalled: "In Keene, we ran diesel vehicles on B20 year-round and never experienced issues. Yes, biodiesel blends do sometimes need to be reduced in winter months to prevent fuel gelling, but all fuel types require some blend adjustments in the winter months, including diesel."

As with the adoption of any new vehicle, fleets should carefully consider the best fuel for their application and climate. However, regardless of fuel choice, fleet managers around the country can be confident that alternative fuels are up to the job in even the most extreme temperatures and terrain. Further, as concerns about global climate change increase, fleets and the communities they serve can feel good about minimizing their greenhouse gas emissions, reducing their dependence on petroleum, and contributing to cleaner air in the process. 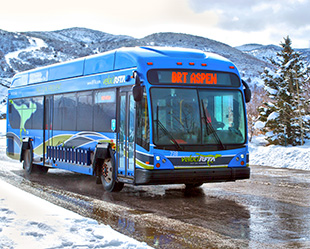