The ground employees have found the transition to the new electric vehicles to be effortless. The vehicles are easy to operate and quiet, and they have no tailpipe emissions.

The skies above the Seattle-Tacoma International Airport (Sea-Tac) are clearer thanks to an initiative aimed at integrating electric ground support equipment (eGSE) into the airport's operations. In fact, Sea-Tac's cutting-edge equipment is helping Alaska Air Group (Alaska Airlines and Horizon Air) cut fuel consumption by 250,000 gallons and save $500,000 annually. Because of this success, the airport has begun working with the remaining airline tenants to acquire more eGSE.

Sea-Tac, which is operated by the Port of Seattle (the Port), maintains a long history of collaboration with Western Washington Clean Cities (WWCC). When the airport started exploring an initiative to electrify ground support equipment, including baggage tugs, belt loaders, and aircraft pushback vehicles, it was only natural to share their idea with WWCC. Alaska Air Group, the airport's largest tenant, had also been eyeing eGSE for almost 10 years to reduce ground emissions and cut fuel costs. So when WWCC decided to apply for American Recovery and Reinvestment Act (Recovery Act) funding in 2009, it was an opportunity for Sea-Tac to lay the groundwork for the eGSE project, with Alaska Air Group leading the charge.

"The vision and collaboration between the airport and its largest airline was key to this project's success," said Stephanie Meyn, Sea-Tac program manager and former WWCC coordinator.

Both Alaska Air Group and Sea-Tac were recipients of funding from the $15 million Recovery Act grant administered by WWCC. In fact, one third of the grant went to vehicles and infrastructure at Sea-Tac. After discovering that an airport-wide eGSE leasing model was not feasible, Alaska Air Group purchased 204 of its own eGSE vehicles (such as baggage tugs, belt loaders, and pushback tractors) directly from Charlatte America, using $1.5 million of the Recovery Act project award. To support the initiative, Sea-Tac pooled $30 million, including an additional $3.5 million from the Recovery Act project award, $5.5 million from a Federal Aviation Administration Voluntary Airport Low Emission Program project award, and Port budget sources to install 576 charging locations for eGSE throughout the airport. Following a competitive bid, AeroVironment provided Sea-Tac with their PosiCharge smart charging stations, which efficiently measure which eGSE needs the most charging and meters out electricity accordingly. These smart charging stations promote the efficiency of Alaska.

Air Group's ground operations by guaranteeing that equipment is charged and ready to handle the airport's fast-paced, round-the-clock operations.

Currently, the north half of the airport is equipped with 296 eGSE charging locations, while the remaining 280 charging installations are slated for completion in 2017. Because Sea-Tac owns all of the charging locations and is a registered utility, the airlines benefit from paying low electricity prices for their use. Alaska Air Group is already making good use of the charging infrastructure. As of 2014, the airline met its goal of 30% fleet-wide electrification and is seeing the benefits of these vehicles first hand, including a one-year payback period on the incremental cost.

"Because airlines themselves are restricted from receiving funding from the airport, this project could not have happened without the support and Recovery Act funding from Western Washington Clean Cities," said Scott DeWees, co-coordinator of WWCC.

The coalition also provided Sea-Tac with other valuable services, such as evaluating proposals and providing expertise to help the airport compare alternative fuels. The coalition played a key role in reworking the project directly with the airline when the airport lease model did not pan out.

"When things don't go according to plan, that's when you hear great stories about the reliability of Clean Cities," Meyn said.

In fact, Southwest Airlines and United Airlines have completed eGSE pilot projects and placed orders for their own vehicles. Sea-Tac anticipates that if all of its airlines switch to eGSE, the airport will cut at least 10,000 metric tons of CO2 annually.

Aside from the environmental benefits, Meyn says the success of the project can also be measured by the satisfaction of the ground crews.

"The ground employees have found the transition to the new electric vehicles to be effortless," she said. "The vehicles are easy to operate and quiet, and they have no tailpipe emissions."

Alaska Air Group plans to continue to add eGSE in locations where it is operationally feasible.

"It's a win-win for our company, our employees and vendors, and for the local communities," said Janet Baad, environmental affairs manager with Alaska Air Group.

As with any pilot project, Alaska Air Group encountered a few hurdles during the switch to eGSE. One was establishing the placement for the Posi-Charge equipment. As airlines merge or grow, the gates assigned to each airline change, so placement created a challenge. To manage this, Sea-Tac developed a more flexible installation system that allows equipment to be moved a few feet in either direction at a particular gate. Another difficulty was ensuring that the charging equipment was installed and ready for use by the time the eGSE were delivered to the airline. Because of this, both Alaska Air Group and Sea-Tac had to be fully invested to guarantee success of this project.

"Many airlines can learn from the experiences of Alaska Air Group," Meyn said. "In addition to careful coordination and planning, positive relationships between airlines and the airport are critical to the project's success."

Sea-Tac's commitment to alternative fuels doesn't stop at eGSE. The airport also has 40 shuttle buses, 2 sweepers, and 60 light-duty vehicles running on compressed natural gas (CNG). To grow the market for CNG vehicles in the area, Sea-Tac required that the airport's CNG station be publicly accessible. As a result, drivers of CNG taxis and personal vehicles can fuel up at the airport's public CNG station or at four other public stations within 35 miles of the airport.

To further reduce airport emissions, Sea-Tac also requires taxis servicing the airport to use alternative fuels or have a fuel economy rating of at least 45 miles per gallon. As of 2015, there are now 93 hybrid electric taxis and 17 CNG taxis serving the airport. In 2014, the airport's numerous emission reduction projects led Sea-Tac to become the first airport in North America to receive the Airport Carbon Accreditation award.

"Sea-Tac's sustainable achievements are a result of its firm commitment to reducing emissions and reducing the airport's carbon footprint," stated Meyn. "The airport is helping to lead the industry in greenhouse gas reductions and is a model of sustainable growth for airports across the country."

Sea-Tac and its tenants are continuing to explore ways to expand their current initiatives and implement new projects, but their leadership in airport sustainability is off to a flying start! 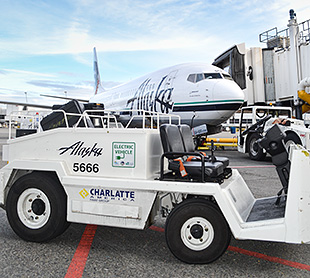