This is a text version of the video segment Phoenix Cleans Up with Natural Gas, which aired on Feb. 27, 2016.

JOHN DAVIS: Our success story this week takes us to Phoenix, Arizona, where the city's refuse trucks are lining up to get their fill of CNG. There are 62 CNG trucks in the city's solid waste fleet, a number that is sure to grow. The goal is for 80 percent of the department's vehicles to be CNG by 2020.

Partnering with the Valley of the Sun Clean Cities Coalition, the city has both reduced pollution and fuel costs since the early 2000s.

JENNIFER CAMPBELL: The cost savings on fuel runs at least a dollar a gallon and, of course, the CNG costs are much more stable than the diesel or unleaded costs, which, as you know, fluctuate throughout the year.

JOHN DAVIS: As diesel trucks in the fleet age out, CNG trucks are in the pipeline, ready to replace them and roll out onto Phoenix city streets! 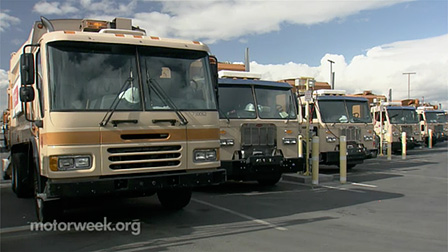