This is a text version of the video segment Hybrid Electric Shuttle Buses Offer Free Rides in Maryland, which aired on June 18, 2010.

JOHN DAVIS: Our success story of the week comes from Baltimore, Maryland, where the brightly colored Charm City Circulator is creating quite a green buzz around town. Baltimore is the first to use the EcoSaver IV Hybrid Electric bus by DesignLine as part of a major free-shuttle fleet.

Thirty percent of the time, the 44-passenger buses run emissions free on electric power alone. Then a small, diesel-fueled turbine generator kicks in to replenish the battery pack. Transit officials are so far very pleased as the EcoSaver IV is chalking up big savings on fuel costs.

Baltimore currently has 12 EcoSavers in service with a total of 21 on order. They are already being used on two of the three Charm City Circulator routes and are proving even more popular with riders than transit officials expected—providing residents of Charm City a big, eco-friendly lift. 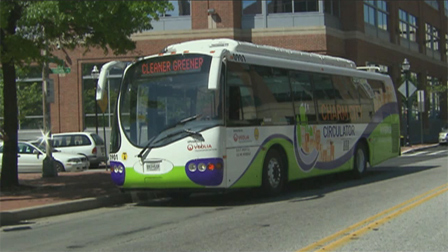