This is a text version of the video segment Krug Energy Opens Natural Gas Fueling Station in Arkansas, which aired on June 18, 2016.

JOHN DAVIS: Our success story this week takes us to Searcy, Arkansas, where these trucks are pulling in and fueling up on compressed natural gas.

Krug Energy opened up this CNG station about a year ago to serve the growing natural gas needs in the Natural State.

Along with refueling their own CNG semi fleet, the pumps are open to the public—something the city of Searcy takes advantage of. It's where their new CNG refuse trucks fill up.

RUSH KRUG: It does not fluctuate like diesel at all. It's very nice just to be able to know what that cost is going to be pretty much every month.

JOHN DAVIS: Krug Energy has worked closely with Arkansas Clean Cities and received $400,000 from the state's Gaseous Fuels Rebate Program—helping to ensure a cleaner Arkansas future for years to come. 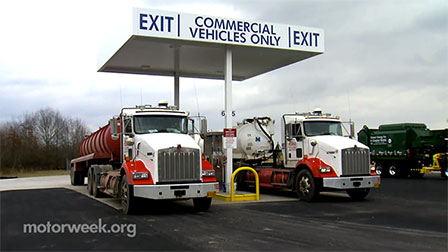