This is a text version of the video segment North Carolina's Henderson County Focuses on Natural Gas, which aired on Feb. 6, 2016.

JOHN DAVIS: Our success story this week takes us to Henderson County, North Carolina, where CNG-powered vehicles are so popular they've already expanded their filling station.

The county station was completed in 2011 and is open to both government fleet vehicles and the public.

With so much activity, the county sought grants through the Land-of-Sky Clean Vehicles Coalition to add vehicles and additional CNG storage spheres to keep up.

RACHEL KIPAR: There seems to be a much bigger push in our county and within our region largely to move towards very green and fuel-efficient vehicles.

JOHN DAVIS: There are 13 clean fuel vehicles in the county's fleet including this heavy-duty pickup.

Last year alone, the county used 28,000 gallons of CNG instead of diesel and displaced 88 tons of greenhouse gases—closing the door on a very clean year. 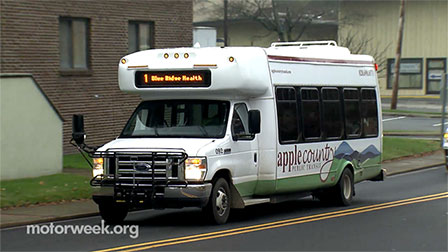