Greater Indiana Clean Cities coalition's support was instrumental to this project. Clean Cities was with us from the start and they continue to provide the resources, funds, and support we need to meet our shared goal of petroleum reduction.

When ampCNG isn't busy expanding its national network of public natural gas stations, the company is hard at work managing its fleet of long-haul delivery trucks for its subsidiary company, Renewable Dairy Fuels. ampCNG's fleet of milk transport trucks runs on compressed natural gas (CNG) made from cow manure produced at Indiana-based Fair Oaks Farms' dairy operation. In just four years, ampCNG has driven millions of miles on this renewable form of natural gas, or RNG, and has displaced nearly 6 million gallons of petroleum in the process.

ampCNG, a CNG station developer based in Chicago, Illinois, is on a mission to help fleets switch from conventional fuels to RNG. To date, ampCNG owns 19 CNG fueling stations throughout the country, and ultimately plans to expand to more than 100 stations. The company has also been an active member of the Greater Indiana Clean Cities (GICC) coalition since 2009, and joined the U.S. Department of Energy's National Clean Fleets Partnership (NCFP) in 2013. ampCNG's interest in using more sustainable forms of fuel began in 2010, when the company partnered with Fair Oaks Farms to develop an anaerobic digester that would convert cow manure to biogas—an effort to help the farm meet aggressive national emissions standards.

"We were searching for investment opportunities in renewable energy when we heard about the Fair Oaks Farms' plan to build a digester," said Steve Josephs, co-founder and director of engineering at ampCNG. "ampCNG was interested in the project, so we invested in the digester in the hopes of producing renewable power."

Completed in 2011, the digester converts cow manure to nearly carbon-neutral biogas, and eventually pipeline-quality natural gas. When electricity prices dropped in 2011, ampCNG began researching other ways to use the excess biogas. ampCNG ran the numbers and determined that using RNG as a transportation fuel for its fleet of milk transport trucks would result in greater financial savings and emissions reductions. ampCNG's continued investment with Fair Oaks has allowed the venture to become the largest producing digester-to-RNG project in the country. In addition, the fuel production facility at the farm is connected to the Northern Indiana Public Service Company pipeline, so any excess RNG is routed into the pipeline.

"This project was a huge undertaking, but ampCNG set the stage for other like-minded fleets to learn from their experiences," said Kellie Walsh, GICC executive director and ampCNG's National Clean Fleets Partnership account manager.

With the help of GICC and a partnership with their truck outfitter, Palmer Trucks, ampCNG acquired forty-two 9-liter (L) natural gas delivery trucks. In addition, the company installed an on-site fueling station in Fair Oaks, Indiana, and later added another station in Sellersburg, Indiana, to fuel the trucks on both ends of their route. ampCNG's carrier company, Ruan Transportation Management Systems (Ruan)—also a member of the NCFP—was a key partner in implementing the project. The fleet's first 9L Kenworth CNG tractors went into service in 2011 and paved the way for the second-generation fleet of 12L tractors, beginning in late 2013. ampCNG received a $2 million American Recovery and Reinvestment Act (Recovery Act) award to purchase the CNG tanks for the initial 9L trucks, which they removed and installed on the 12L trucks during the transition. In addition, GICC facilitated an additional $750,000 Recovery Act award to fund the fueling infrastructure installation.

"We took a pretty deep dive into a project that wasn't completely vetted at the time," Josephs said. "The individual pieces--the digester and the CNG trucks—were proven technologies on their own, but no one else had tried to put these pieces together before. And it worked!"

Throughout the project, ampCNG worked closely with GICC for assistance in securing grants, understanding federal and state funding, and navigating the permitting process.

"GICC's support was instrumental to this project," Josephs said. "Clean Cities was with us from the start and they continue to provide the resources, funds, and support we need to meet our shared goal of petroleum reduction."

Waste Not, Want Not

Since ampCNG deployed its first-generation truck fleet in 2011, the fleet has logged 38 million miles on RNG. As a result, the company has been able to displace nearly 6 million gallons of petroleum, reduce 7,100 tons of carbon dioxide emissions, and save approximately $3 million in fuel. Because of the fleet's high mileage, the typical payback period on each truck is about three years.

Financial benefits aside, ampCNG is seeing other perks from their RNG project. Ruan's drivers enjoy the quiet, high-performing tractors and the fact that the fuel is odorless upon combustion.

"The cows don't take the weekends off, so these trucks run two to three shifts per day, 365 days a year," Josephs said. "When we began this project, the CNG tractors were still fairly new to the market and the number of fleets using them for long-distance hauling was limited. But these trucks have proven to be a big hit with our drivers, and they work for our business."

Additionally, ampCNG's partners are pleased with the outcome.

"Starting something new, like running an RNG fleet, isn't necessarily easy, but working with ampCNG and our other partners has allowed us to keep moving toward our sustainability goals," said Mike McCloskey, co-founder of Fair Oaks Farms.

As icing on the cake, ampCNG's efforts in fleet sustainability earned it a nomination for the Commercial Carrier Journal's Innovator of the Year in 2012. In addition, ampCNG was featured in a 2011 MotorWeek episode, and will appear again in a future episode that highlights recent progress.

Steering Others in the Right Direction

Like all fleets trying a new fuel or technology, ampCNG experienced some challenges during implementation. Specifically, the horsepower of the 9L engines presented a challenge to the long-distance hauling operations. ampCNG overcame this issue by working with Palmer Trucks to open an on-site garage in Fair Oaks, staffed with mechanics dedicated to maintaining the tractors. Once the company upgraded to the 12L engine, the fleet has reported no issues related to horsepower. ampCNG also struggled with navigating the digester permitting process, but worked with GICC to overcome these hurdles.

"This was the first time a digester had sold fuel to a utility and injected it right into the pipeline system. ampCNG worked with us to figure out the permitting process, the renewable identification number system, and the price point," Walsh said.

Milking it for all it's Worth

ampCNG is now committed to teaching other fleets about CNG, based on its experiences. Specifically, its CNG 101 website provides white papers, videos, cost calculators, and other resources to assist fleets interested in using CNG.

"We are a rolling laboratory," Josephs said. "We believe strongly in our experiences and want to share what we've learned with others."ampCNG continues to push for alternative fuel use, despite the recent dip in petroleum prices. Rather than shifting away from natural gas, ampCNG encourages fleets to use the savings from low gasoline prices to invest for the future in their alternative fuel portfolio. "Based on our experience, the economics of natural gas works," Josephs said.

"There's no doubt that one day conventional fuel prices will rise again and prove how volatile they are. When that day comes, you don't want to be starting at square one with alternative fuels." Additionally, Josephs recommends that fleets experiment with one or two trucks to get operational experience.

"Do your homework," Walsh echoed. "Every fleet is different, so do the research. Start a small pilot and take advantage of your local Clean Cities coalition to learn more about your options." 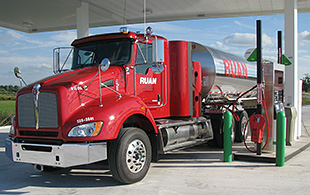