I like that the program introduced education and not just vehicles. We were able to teach our staff about driver behavior, implement a motor pool, and install a tire inflation station to educate visitors about our efforts.

As part of the Climate Friendly Parks Program, Sleeping Bear Dunes National Lakeshore in Empire, Michigan is always looking for ways to reduce its climate and environmental impact. While the facilities at the park are climate-friendly and energy-efficient, visitor vehicles and the park's fleet offers an opportunity for improvement.

"Sleeping Bear Dunes hosted CEC at its climate friendly park workshop, setting the stage for this important partnership," said Sean Reed, executive director of CEC. "Following our presentation on the Clean Cities National Parks program and alternative fuel opportunities for the park, Sleeping Bear Dunes developed a proposal for funding and we identified ways our coalitions could support their efforts."

The funding enabled the launch of a collaborative effort to introduce alternative fuel vehicles to the park's fleet, while educating staff and visitors about the impact of vehicle fuel use on the climate. Tom Ulrich, acting superintendent of Sleeping Bear Dunes, appreciated how the project included more than just vehicles. "I like that the program introduced education and not just vehicles. We were able to teach our staff about driver behavior, implement a motor pool, and install a tire inflation station to educate visitors about our efforts."

The greatest challenge that Ulrich and his staff faced was waiting patiently from one project milestone to another--from receiving the funding to deploying vehicles and implementing technologies to meet the project's goals. It was a few years between grant initiation and completion and, as a result, Ulrich encourages others implementing similar projects to be patient.

A smaller challenge that the park faced was breaking old habits and getting used to the motor pool.

"We had some people that would hang onto their keys (instead of returning them to the pool) and forget to sign the log just because it was what they were used to," said Ulrich. With the motor pool in place for over a year now, however, staff has adjusted to the changes.

Overall, efforts led by the Sleeping Bear Dunes National Lakeshore were well received and successful. Ulrich shared that he plans to continue replacing retired fleet vehicles with the most clean and efficient vehicles available. 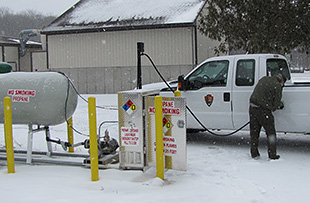