This is a text version of the video segment Phoenix Utility Fleet Drives Smarter with Biodiesel, which aired on Aug. 26, 2017.

JOHN DAVIS: Our success story this week takes us to Phoenix, Arizona, where one utility company is driving smarter with biodiesel.

From light- to heavy-duty, Salt River Project has some 2,300 pieces of motorized equipment in their fleet—with over 40% powered by renewable B20 biodiesel.

But this green way of getting around is nothing new for SRP. As a long-term partner with the Valley of the Sun Clean Cities Coalition, they began using biodiesel back in 1999.

BECKY LAWRENCE: We realized that we needed to do something that was going to have an environmental impact, and we decided to go ahead and explore B20.

JOHN DAVIS: With over 15 million miles driven and over 900,000 gallons of biodiesel used annually, Salt River has found their cure for fueling growth in the Grand Canyon State. 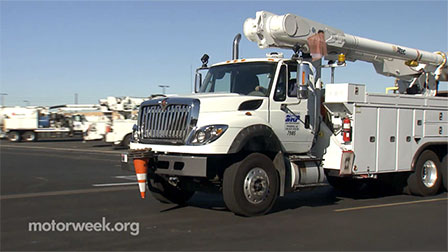