This is a text version of the video segment City of Hendersonville Converts Vehicles to Natural Gas in North Carolina, which aired on Aug. 6, 2016.

JOHN DAVIS: Our success story this week takes us to Hendersonville, North Carolina, where they're driving into the future on compressed natural gas.

This garbage truck and street sweeper are just two of the CNG-fueled vehicles that are in this mountain city's fleet.

Hendersonville worked with Land of Sky Clean Vehicles Coalition to get grant money to convert a total of five vehicles to CNG.

The fleet has already displaced over seven tons of greenhouse gas emissions and is saving money at more than just the pump.

TOM WOOTEN: You don't have to change the oil as much in these vehicles as you do in a standard truck, so there's some cost savings on the maintenance side. Other than that, it's pretty much the same.

JOHN DAVIS: Hendersonville is getting charged up about electric vehicles too. In fact, we caught Hendersonville's mayor plugging in and taking advantage of all this clean city has to offer. 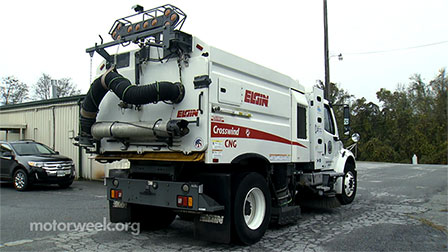