Propane is a cleaner, inexpensive fuel that allows the Alabama Department of Corrections to reduce its dependence on imported oil. Additionally, the state's work release center staff and inmates like the convenience of having the propane fueling stations onsite, which reduces the amount of time that would be required to fuel the vehicles at commercial gas stations.

Ever since Alabama Clean Fuels Coalition (ACFC) hosted its annual Propane Road Show in 2012, officials from the state's Department of Corrections (ADOC) were inspired to see if the fuel could work in their own fleet. Thanks to the Coalition, ADOC officials said they had the resources necessary—such as industry contacts, educational information, and bi-fuel conversion kit recommendations—to confidently propose to switch their fleets to propane The idea immediately caught on at ADOC and officials teamed with ACFC shortly after to begin planning a two-year pilot project to convert 10 of their conventional gasoline vans to propane at the Loxley Work Release Center.

Fast-forward to today, and the ADOC has seen significant fuel cost savings from switching to propane--amounting to $6,612 per year, per van converted from gasoline. Before launching the pilot project, the Department was spending more than $1.3 million on gasoline a year to fuel a fleet of roughly 80 passenger vans. The vans, which can hold up to 15 passengers, are used daily to bring inmates to their job assignments. After seeing notable success from just 10 vans in two years, the Department has added 55 more propane vans to its fleet, built onsite propane fueling stations at ADOC facilities statewide, and contracted with propane marketers to serve the ADOC fleet in areas throughout Alabama.

Assessing the Costs and Benefits

To get an idea of the requirements for the Corrections Department's vans, ACFC first conducted an assessment of the annual mileage traveled by each van to get to and from work release facilities. From there, the coalition was able to project that a switch to propane could bring significant savings, based on the cost of each vehicle conversion and the estimated miles per gallon (MPGs) for both gasoline and propane vans. ADOC developed a proposal to procure 10 bi-fuel vans which could run on propane or gasoline, as well as plans for the fueling infrastructure to support the fleet. The project was funded by a variety of resources, including private funding, the State of Alabama, and federal resources such as the U.S. Congestion Mitigation and Air Quality (CMAQ) program.

"Over a couple of years, ACFC facilitated a number of workshops on alternative fuels that were attended by ADOC management," said Mark Bentley, Executive Director of ACFC. "Drawing on the industry contacts and expertise available at the workshops, ADOC management was able to weigh their options and decided to pursue propane as a viable alternative for their fleet."

The fueling station and the first 10 Ford F-350 vans that were equipped with bi-fuel liquid propane conversion kits were secured through a bid solicitation process with the state's Department of Finance Purchasing Division. ADOC developed specifications for the vans and received assistance from the ACFC to develop specifications for the bi-fuel propane conversion kits. When Stivers Ford, a local dealership in Montgomery, won the bid, Stivers selected the ACFC member Precision Sales and Service to install ICOM conversion kits on each van. ADOC also received information on fueling station specifications from the Propane Education and Research Council, as well as recommendations on infrastructure contractors from ACFC. By January 2014, the 10 propane-fueled vans and 2,000 gallon fueling station at the Department's Loxley Work Release Center were ready for use.

"Because of the seamless installation experience, and the quality of propane conversion kits we used, ADOC really saw no major challenges in equipment performance or operations," said Dr. Andy Farquhar, former Director of the Alabama Corrections Industries who led the pilot project at its inception. "Propane is a cleaner, inexpensive fuel that allows the Alabama Department of Corrections to reduce its dependence on imported oil. Additionally, the work release center staff and inmates like the convenience of having the propane fueling stations onsite, which reduces the amount of time that would be required to fuel vehicles at commercial gas stations."

Farquhar added that propane, used as an on-road fuel, qualifies for the federal Alternative Fuels Excise Tax Credit—and with this credit, there were several days in 2015 when the Loxley Work Release Center's propane fueling costs netted out to zero.

Given the frequent use of the ADOC's vans and convenient access to propane, Farquhar said corrections officials agree that the project has been extremely successful. Since 2014, the vans have driven more than 1.4 million miles on propane with no equipment problems, and the two years' worth of performance data collected has provided valuable data to the ADOC beyond cost savings. The only minor difference between the gasoline and propane-fueled vans, corrections officials noted, has been fuel economy (one gallon of propane has 73% of the energy of one gallon of gasoline). Despite this, and the recent decline in gasoline prices, Farquhar said the Department was able to achieve considerable cost savings—at an advantage of $0.086 per mile—by operating the propane vans.

To top it all off, corrections officials said the use of the propane vans helped them to avert nearly 130 tons of greenhouse gas emissions during the two-year trial. Savings per van have exceeded $6,600 each year, resulting in a payback period of 13.5 months for the vehicle conversions and an additional 16.4 months to cover the installation of the fueling station. With 55 propane vans recently added to the fleet—and all of the initial infrastructure costs accounted for—the ADOC is confident it will see continued cost benefits for years to come.

"We were happy to offer our technical guidance and expertise to Alabama's corrections facilities, but also to help bring the right people together for the project," Bentley said. "When you have the right factual basis and the right people involved, you have a much greater chance of success." 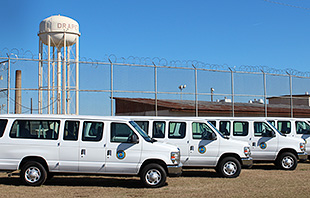