This is a text version of the video segment Worcester Regional Transit Authority Drives Electric, which aired on Oct. 15, 2016.

JOHN DAVIS: Our success story this week takes us to Worcester, Massachusetts, where all-electric is all the rage.

The Worcester Regional Transit Authority started incorporating hybrids into their fleet in 2008 before introducing 6 all-electric transit buses in 2013.

Each Proterra electric bus eliminates 130 more tons of carbon dioxide per year than a diesel bus, and powering up only takes a matter of minutes with an overhead quick charge at the central station.

JONATHAN CHURCH: It's certainly a charger that's tied to a much higher power source—allows us to charge the bus within 5 minutes from as low as 10% all the way up to 95%.

JOHN DAVIS: With help from the Massachusetts Clean Cities Coalition, these all-electric buses have driven over 250,000 emission-free miles, making every day Earth Day on the streets of Worcester. 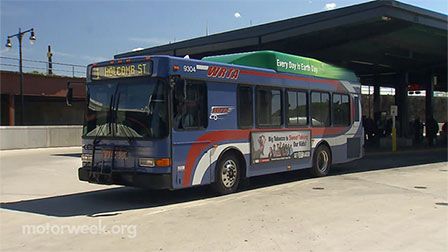