Our stakeholders are proud to have built a first-of-its-kind CNG corridor that's helping local, regional, and national fleets meet their alternative fuel goals.

"The public CNG station network on our interstate highways serves local fleets as well as those fleets and drivers travelling through our state," said Coordinator Eric Pollard of Central Oklahoma Clean Cities (OKCC). "Our stakeholders are proud to have built a first-of-its-kind CNG corridor that's helping local, regional, and national fleets meet their alternative fuel goals."

"Today, Oklahoma has more public CNG stations than any other state in the country, per capita," Pollard added.

Setting and Reaching the State's Ambitious Goal In 2011, Governor Mary Fallin presented her Oklahoma First Energy Plan, the state's first comprehensive energy plan. The plan included a request for help from private sector companies in building CNG infrastructure along Oklahoma's interstate highways. The first step was to install at least one CNG station every 100 miles along the state's interstate highways within four years.

Governor Fallin praised the project team for the accomplishment, adding that the state of Oklahoma has saved more than a million dollars in fuel costs since converting much of its fleet to CNG over the last few years.

"It takes a diverse public and private partnership team willing to work hard in order to achieve a bold goal like having a CNG station within every 100 miles on Oklahoma interstates," Fallin said.

Since key CNG legislation was enacted in 2009, Pollard says that Oklahoma has seen a 920% increase in CNG fuel sales, increased demand for natural gas vehicles, and new jobs in the service and maintenance of natural gas stations and vehicles.

"The state's natural gas vehicle drivers have saved a total of nearly $85 million by using CNG versus regular gasoline since the bill was adopted, and the state is projected to gain more than $13.6 million in positive economic benefit from the natural gas vehicle industry during the next three years," he said.

"There is still a lot of work to be done, since many large Oklahoma communities still do not have CNG stations or are only served by one station," said Scott Minton, market development manager for OnCue Express. "The continued growth of CNG is a win-win, supporting an Oklahoma-produced fuel and advancing Clean Cities goals in the process." 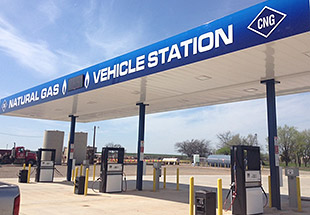