This is a text version of the video segment EV Battery Recycling, which aired on April 13, 2017.

JOHN DAVIS: When hybrids and EVs were a new phenomenon twenty years ago, one of the most frequently asked questions was "How long will the battery last?" Well, we now know that it typically takes 10 years or more and well over 100,000 miles before a battery pack starts losing serious muscle. But then what happens?

For most hybrid vehicles, aftermarket replacement battery packs can be ordered online or through your local auto parts store. Prices for a fully tested, reconditioned pack range from $1,400 to $3,000.

And please don't think about buying a battery pack from your local salvage yard just to save a few bucks. You might find out the hard way if that battery is compromised. Remember these are high-voltage units that can weigh hundreds of pounds and should only be handled by qualified and properly equipped technicians.

Oklahoma entrepreneur Dirk Spiers is determined to find a way to systematically manage those millions of electric car batteries when they reach the end of the road.

JOHN DAVIS: Spiers takes in nearly 10,000 of those individual battery cell modules each week, which are barcoded, cleaned, tested, and charged before undergoing a rigorous cycle of loads and discharges. Cell modules are then sorted according to their measured capacity so that new battery packs can be created with evenly balanced units.

Those cell modules deemed suitable for re-installation into a car are shipped off to aftermarket suppliers for reassembly as plug-and-play units. But where Spiers sees huge growth potential is in repurposing batteries as stationary power storage units for homes and especially commercial buildings where they can have a useful life for decades into the future.

The power draw for an electric vehicle is many times that of a typical house, so a 24 kilowatt lithium-ion pack that might power say an early Nissan Leaf for 80 miles could provide sufficient energy to run your home for a day or two.

But it's not as simple as bolting an old Prius battery to the garage wall. It takes quite a bit of engineering to translate the wiring and control systems from an automotive application to meet structural grounding and safety codes.

This prototype storage unit is being designed so that Habitat for Humanity can provide backup power to their project homes. Other applications include electric vehicle charging stations, buffering power for the grid, backup power supply for sensitive equipment, and on and on.

But this concept isn't completely new and already has a proven track record. In 2015, Toyota donated 208 Camry hybrid battery packs used in conjunction with a solar array to provide sustainable, zero-emission power to Yellowstone National Park's Lamar Buffalo Ranch Ranger Station and Education Center—the first reliable power source this remote facility has had since opening in 1908.

So when you see an EV zipping down the interstate and you take that second look, remind yourself that what you're seeing is a driving future that is here now, and it's one that could keep the power on somewhere for decades to come. 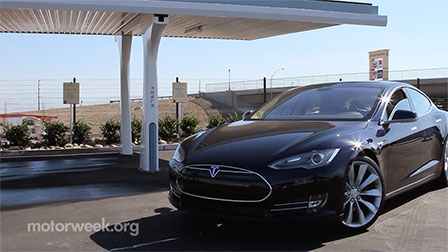