This is a text version of the video segment Camp Discovery Helps Kids Build an Electric Dune Buggy, which aired on Feb. 5, 2011.

The gas engine was replaced by an electric drive system that uses a lithium-ion battery pack and solar panel. The two-seater has a top speed of 55 miles per hour with a range of 30 miles. Project coordinators found the kids learned a huge lesson in EV technology.

GARY KRYSZTOPIK: And that's what we wanted to show the kids, too—that it's very simple. You've got a bunch of batteries and an electric motor, and you connect them up, and it turns, and you go. And that's the beauty of eclectic vehicles—is they're so simple.

JOHN DAVIS: The Alamo Area Clean Cities coalition helped raise funds to build this one-of-a-kind dune buggy. James Houseman, seen here taking it out for a spin, won the auction with a generous bid of $15,000—benefitting the San Antonio chapter of the American Cancer Society. 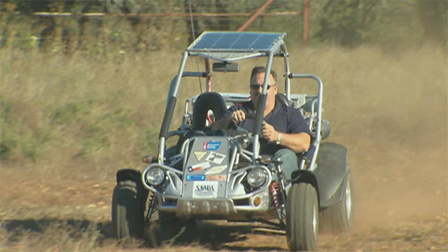