This is a text version of the video segment Johnson Space Center Explores Alternative Fuel Vehicles, which aired on May 19, 2017.

JOHN DAVIS: Our success story this week rockets us right into the heart of alternative fuel exploration at Johnson Space Center in Houston, Texas. First off, visitors can hop on a propane-powered tram for a tour of the JSC campus facilities, which includes two plug-in hybrid vehicles: a Ford C-MAX and Fusion.

JERRY ROWLANDS: 172 times, we have generated more power than what the building uses. This is a grid-connected system, so it's just basically excess electricity that goes out into the JSC grid and is used someplace else.

JOHN DAVIS: At JSC, EV science is also being harnessed for some "out of this world" work like this modular robotic vehicle that could also prove beneficial to earthbound carmakers.

DAVE HANSON: Having electric motors drive vehicles has a number of advantages. First, it's reliability. There are fewer moving parts compared to other types of propulsion.

JOHN DAVIS: With the Houston-Galveston Clean Cities coalition as partner at Johnson, when it comes to alternative fuel, the sky and imagination are the limits. 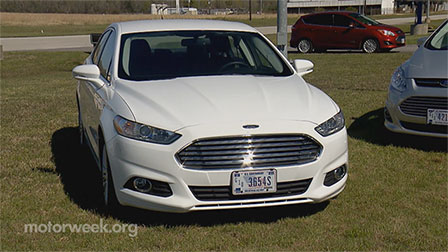