This is a text version of the video segment Cooking Oil Powers Biodiesel Vehicles in Rhode Island, which aired on July 14, 2017.

JOHN DAVIS: Our success story this week takes us to Newport, Rhode Island, where a clean fuel is brewed from cooking oil. Newport Biodiesel produced their first gallon in 2007 and has been cooking on high ever since.

The company collects used cooking oil from thousands of restaurants across New England, bringing it back to their facility to be purified and processed into biodiesel. Distributors then come in and take out the biodiesel for use around the region.

Working with the Ocean State Clean Cities coalition, Newport Biodiesel has been able to spread the clean fuel word across the state.

ROBERT MORTON: It's been a great assistance to us. We actually worked with Clean Cities to get the state to have a blanket ordering agreement that requires biodiesel in the diesel that the state uses.

JOHN DAVIS: The company produced their 10 millionth gallon of biodiesel at the start of 2017 with millions more already on their menu. 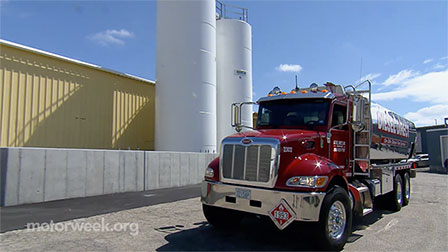