This is a text version of the video segment Idaho Surges Ahead with Electric Vehicle Charging, which aired on Aug. 4, 2017.

JOHN DAVIS: Our success story this week takes us to Boise, Idaho. Since 2012, over 30 public access electric vehicle chargers have been installed in some 20 locations throughout Boise. Many of those were installed with the help of the local electric utility, Idaho Power. Their incentive program provided rebates towards the cost of buying and installing chargers. That allowed the City of Boise to install three charging locations with plans to add more.

And drivers are indeed plugging in. So far, about 100 plug-ins a month at this local Whole Foods grocery alone.

PATTI BEST: It takes the host, whoever is going to host the station to be a part of it, companies like Idaho Power, the government agencies. We can all come together and help get these things built.

JOHN DAVIS: These Level 2 stations provide a full charge in 6 to 8 hours, but the future looks faster. Quick-charge stations are being eyed as the next step in the Gem State's electrical surge. 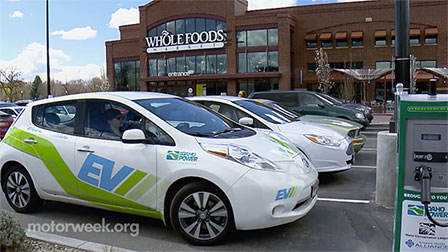