This is a text version of the video segment Natural Gas Trains Make the Grade in Florida, which aired on July 2, 2019.

JOHN DAVIS: Our success story this week takes us for a ride along the railroad tracks near Jacksonville, Florida, where an alternative fuel is saving money and helping to keep the trains running on time. Liquefied natural gas is powering Florida East Coast Railway trains traveling to and from Miami. This alt fuel is replacing about 80% of the train’s diesel fuel. Working with the North Florida Clean Fuels Coalition, the railway is the first in North American to operate its entire freight train fleet on LNG. 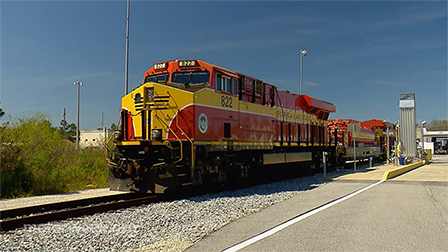