Metropool successfully demonstrates that EVs can compete head-to-head with conventional gasoline vehicles in the rideshare duty cycle. EVs are dependable and efficient, and generate cost savings and big environmental wins.

Since 1979, Seattle-based King County Metro Rideshare Operations has managed the largest publicly owned and operated commuter van program in the nation. The program aims to cut energy use and emissions by reducing the number of single-occupancy vehicle trips. Beginning in 2011, that goal got a boost after the agency started incorporating all-electric vehicles (EVs) into its rideshare program—Metropool—making it one of the first agencies in the nation to do so.

In 2010, King County adopted a detailed roadmap, the 2010 King County Energy Plan (Roadmap), to further reduce the energy use of its operations. To contribute to the Roadmap’s objectives of increasing transit use, providing transportation choices that reduce energy use and emissions, and being a leader in the adoption of electric vehicles, King County Metro introduced 20 Nissan LEAFs into its 1,300-vehicle revenue fleet. Because of the vehicles’ high customer satisfaction, positive return on investment, and increasing demand, King County Metro continues to purchase Nissan LEAFs and plans to expand the program as EV technology improves.

To launch the program and help spread the word, the Rideshare Operations team partnered with Western Washington Clean Cities (WWCC) and major employers in the region. Together, they reached out to commuters and introduced Metropool as a cost-effective transportation choice. Toward this goal, the Rideshare Operations team provided concept development, policy review and program updates, and financial and operational management.

"As a result of our thorough analysis, we allocated infrastructure intelligently and in a way that supported Metropool," said Michael Graham, WWCC executive director.

Since launching the program, the Rideshare Operations team has learned that although EVs work in many applications, a larger network of EV chargers and EVs with longer range are needed for a zero-emission fleet.

"Initially, our 2011 Nissan LEAFs had an operating range of approximately 81 miles, so we limited their service to commuters that traveled up to 50 miles roundtrip to provide a cushion for driving conditions, such as hilly terrain, that can reduce range," explained Craig Foster, the Mobility Services fleet operations chief.

As the 2011 Nissan LEAFs reached the end of their useful life, out of an excess of caution the team reduced the cap on the roundtrip mileage to 30 miles to account for battery degradation and prevent any commuters from getting stranded. As EV driving range continues to increase with newer models, EVs have become suitable for even longer trips. According to Foster, the agency’s latest models have a range that exceeds 150 miles. "Our average roundtrip is 42 miles," said Jim Carpenter, fleet operations transportation planner, "so there are a lot of trips that fit the bill for the LEAFs."

To ensure Metropool commuters can regularly access charging, the Rideshare Operations team prioritizes participating employers that offer workplace charging. Several participating employers offer no-cost access to EV chargers for Metropool commuters. "Due to reimbursement and liability challenges, as well as a changing customer base, we strongly recommend workplace charging as a solution to supplement the public charging network rather than home charging," Carpenter explained.

According to Carpenter, another barrier to EV adoption in a vanpool program is the limited number of electric passenger vans with additional space and seating capacity. When riding in vans, commuters generally prefer spreading out rather than being in close contact. To help incentivize commuter use of the smaller Nissan LEAFs, the team allows unlimited personal use of the vehicles beyond just commuting. "We continue to provide that carrot," Foster said. "It keeps the vehicles on the road and maximizes energy use and emissions benefits."

The unlimited personal use has, in part, contributed to the popularity of the Nissan LEAFs as a vanpooling option. Many commuters have expressed interest in using the LEAFs, prompting the team to maintain an EV wait list.

"Best Value in Their Class," and Other EV Benefits

Beyond high customer satisfaction, the Rideshare Operations team has shown that EVs can make financial sense. "We’ve found that Nissan LEAFs offer the best value for vehicles in their class and allow us to meet our requirement of recovering operating and capital costs," added Carpenter.

Even though the capital costs of the EVs are more per unit than gasoline vehicles, Foster explained that the agency absorbs the incremental cost difference—about $12,000—by spreading it over the fleet with a standard fare for EVs and gasoline minivans. In addition, the agency has noted that the average operating cost per mile for a Nissan LEAF is less than half that of the gasoline minivans.

Ultimately, the EVs continue to help Metropool meet its energy use and emissions-reduction goals. During their seven-year life in the commuter van program, the first batch of EVs collectively traveled more than 904,000 miles, saved 53,000 gallons of gasoline compared to prior modes of transportation, and reduced more than 470 tons of greenhouse gas emissions.

In 2020, King County Council adopted an ordinance to accelerate the adoption of EVs, including a goal for a 100% zero-emission rideshare fleet by 2030. Looking ahead, Rideshare Operations will expand its EV rideshare program to meet that goal. 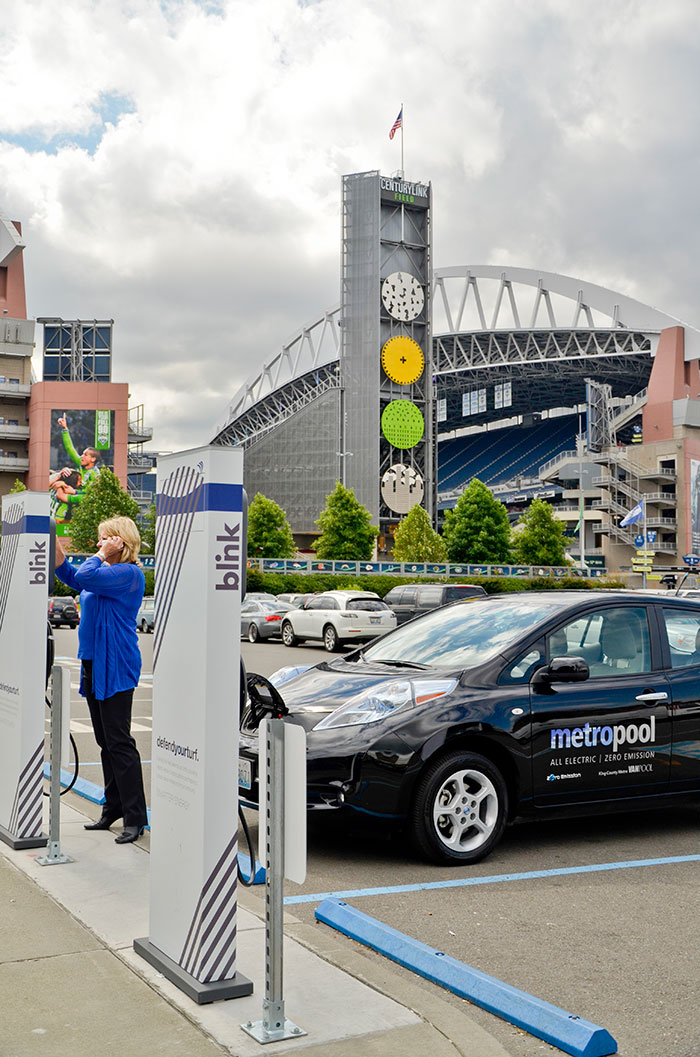