This is a text version of the video segment Salt Lake City Fuels Vehicles With Natural Gas, which aired on Dec. 14, 2013.

JOHN DAVIS: Our success story this week takes us to the crossroads of the West: Salt Lake City, where Utah's first refueling station that provides both liquefied and compressed natural gas is now open for business.

The station can fill a wide variety of vehicles that run on either LNG or CNG. Both are clean burning, but natural gas is super-cooled to -260°F to create LNG. That allows much more fuel to be stored in a smaller tank. That's important for the big rigs that need to drive long distances. But this station can also supply CNG for use in smaller vehicles that are used locally.

MERRIT NORTON: We aren't limited by pressure. We can fuel up as many cars and light trucks as come to the station pretty much as fast as they can pull in 24 hours a day.

JOHN DAVIS: The Salt Lake City station, now joined by five others in Utah, along with two new stations in Idaho, forms a continuous long-haul truck alt-fuel corridor from the region all the way to the Southern California coast. 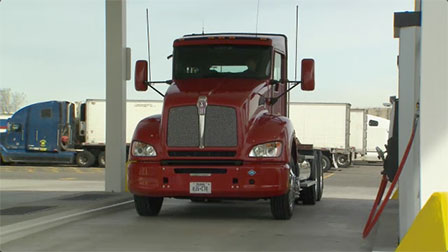