This is a text version of the video segment New Jersey Utility Saves With Alternative Fuel, which aired on May 7, 2011.

JOHN DAVIS: Our success story this week finds us at the Jersey shore, where the Atlantic County Utilities Authority has found that going green lets them save a lot of green, too. Not only does the ACUA capture landfill methane to generate power, but they're using wind and solar energy as well, and operate the only wind farm in New Jersey.

Many of their fleet vehicles use biodiesel while a new public-access compressed natural gas fueling station will service the ACUA's own fleet of 15 CNG refuse trucks as well as the 190 private Jitney buses that transport visitors around Atlantic City every day.

RICK DOVEY: The concept in joining with Clean Cities on the CNG project was, first of all, the environment—second of all, money. By all of the projects in our green portfolio, we have made a significant reduction in our greenhouse gas emissions, and also we've saved over $2 million a year in operating costs.

JOHN DAVIS: You could say that when it comes to clean, alternative energy, Atlantic County, New Jersey, has all bets covered. 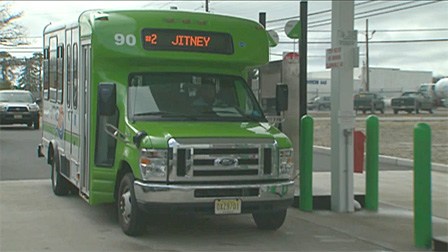