This is a text version of the video segment Frito-Lay Delivers With Electric Truck Fleet, which aired on Sept. 22, 2012.

JOHN DAVIS: Our success story this week takes us to Columbus, Ohio—one of three cities serviced by an electric truck fleet owned by snack food giant Frito-Lay. As one of the Department of Energy's National Clean Fleets partners, Frito-Lay has launched a fleet of Smith Newton electric trucks, the world's largest electric-powered truck with two lithium-ion battery packs, a three-phase induction motor, and a 160-horsepower rating.

Regenerative braking and this Opus digital readout that shows precisely how much charge is remaining helps drivers achieve a 100-mile range. With zero tailpipe emissions and a virtually silent drive, it's no wonder that the crew behind the wheel doesn't want to get out when their shift is done.

GLENN REYNOLDS: What we've done is work with the driver to pair up with them—drive the route with them specifically—so that we show them that it meets their needs and that it will not impact their business negatively.

JOHN DAVIS: By the end of 2012, Frito-Lay North America expects to have 280 units in service, which would make them one of the largest all-electric truck fleets in the land. 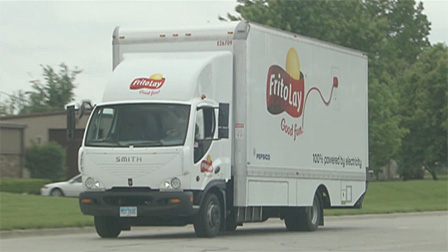