This is a text version of the video segment Yellow Cab Converts Taxis to Propane in Columbus, Ohio, which aired on July 9, 2011.

JOHN DAVIS: This week's success story takes us to Ohio's capital city, where Yellow Cab of Columbus is overhauling their fleet with propane power. Currently, 15 cars are fitted with a double-wall tank in the trunk storing about 25 gallons of high-octane, clean-burning propane gas.

The propane taxi cabs are averaging the same fuel economy as gasoline while saving more than $1 a gallon. Their own onsite propane fueling stating comes in handy as well.

JEFF GLASSMAN: We feel this is a good thing for the environment and for the country when we're less dependent on foreign oil since most of the propane is made in the United States.

JOHN DAVIS: The company's technicians convert the propane taxis in house. And thanks to a grant from Clean Fuels Ohio, Yellow Cab of Columbus is planning to add 10 more propane taxis—all helping make the Buckeye Capital a truly clean city. 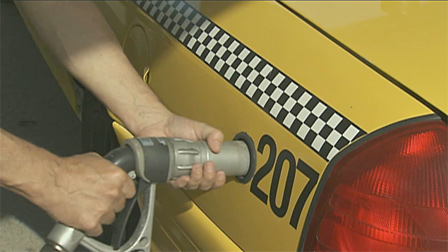