This is a text version of the video segment Reynolds Logistics Reduces Fuel Costs With EVs, which aired on July 23, 2011.

JOHN DAVIS: Our success story this week profiles a freight hauler in Tucson, Arizona, that's charged up over the use of electric and alternative fuel vehicles.

Reynolds Logistics, working with the Tucson regional Clean Cities coalition, purchased these pint-sized, three-wheeled EVs in 2006 to help reduce the cost of rising petroleum fuel surcharges for their customers.

The initial range of 80 miles is boosted to 105 miles by using downtimes during the day to partially recharge. In 2009 and 2010, Reynolds drove close to 1 million miles with their fleet of 22 ZAP electric vehicles.

RICK REYNOLDS: In a two-year period, we were at $175,000 just simply in the amount of fuel that we didn't have to purchase because we were using electric vehicles.

JOHN DAVIS: Reynolds Logistics is also using some 320,000 gallons of B20 biodiesel yearly to fuel a portion of their over-the-road tractor trailer fleet. While only a small part of their total fuel needs, it's still a welcomed step in the right direction from an Arizona company making significant alt fuel moves in freight. 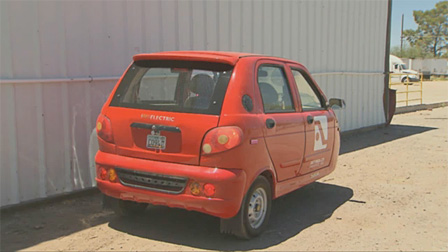