This is a text version of the video segment Electric Trucks Deliver at Kansas City Schools, which aired on Sept. 17, 2011.

JOHN DAVIS: Our success story this week pays a visit to the Lee's Summit, Missouri, R-7 School District, where four Smith electric trucks are used to deliver dry goods and supplies to more than two dozen schools and offices.

The 26-foot box trucks have a 100-mile range, which is ideal for delivery routes. The trucks' batteries are fully recharged in 6 to 8 hours overnight. The trucks are so quite that rearview cameras were added so drivers can watch out for kids and pedestrians.

Early estimates are for $8,000 to $12,000 savings in diesel fuel per school year. The district has also placed signage on the trucks to boost alternative fuel awareness.

RON COX: It's cleaner. It's greener. It's safer, and it's the way we need to go. And so we're proud of that, and we want to advertise that for public information.

JOHN DAVIS: Partial funding for both the electric trucks and charging stations came from a federal grant in cooperation with the Kansas City Regional Clean Cities coalition. The Lee's Summit R-7 School District is doing their part to show support for the environment in the Show-Me State. 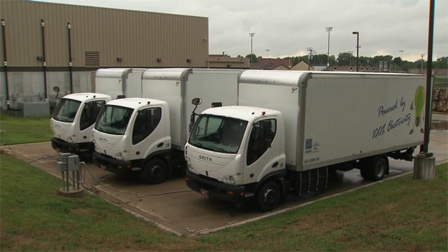