This is a text version of the video segment EV Charging Stations Spread Through Philly, which aired on March 3, 2012.

JOHN DAVIS: Our success story this week takes us to Philadelphia, PA, where a new public-access electric car fleet might have even persuaded our founding fathers to embrace energy independence. Rental car giant Enterprise Holdings recently signed on as one of the Department of Energy's National Clean Fleet partners.

One of their subsidiaries, PhillyCarShare, already has 50 hybrid electric and plug-in vehicles in their fleet, including 18 Chevrolet Volts.

By working together with the City of Philadelphia, the local Clean Cities coalition, and other key regional partners, the PhillyCareShare EVs will be able to take advantage of charging stations that are already popping up across the City of Brotherly Love.

JAMES CALLAHAM: We think there are a lot of people in the City of Philadelphia that really care about the environment—that want to make sure that we have fuel-efficient vehicles that are utilized here in Philadelphia.

JOHN DAVIS: PhillyCarShare is looking to expand their plug-in and hybrid vehicle fleet to at least 100, saving 65% in yearly fuel costs, making it a true electric car leader for the Keystone State. 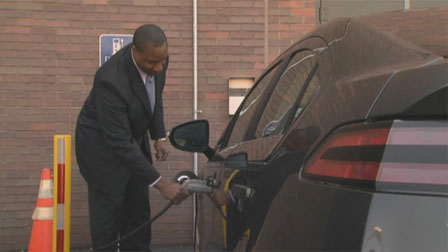