This is a text version of the video segment Alternative Fuel Vehicles Lower Emissions in Columbus, Ohio, which aired on Dec. 11, 2009.

This new CNG refuse truck has saved the city over $1,600 in less than a year. They plan to add 21 more CNG trucks by 2011. Right now, Columbus fills up with CNG off-site, but by the time the new trucks arrive, they'll have a station of their own.

In 2007, the city began using biodiesel in snowplows and other heavy-duty vehicles. They'll replace nearly one million gallons of petroleum with biodiesel in 2009.

And, to improve air quality, Columbus is outfitting nearly 130 older trucks with diesel oxidation catalysts and diesel particulate filters. This 1998 fire engine is even on the list to be cleaned up as the country's "fourth cleanest city" strives to become number one. 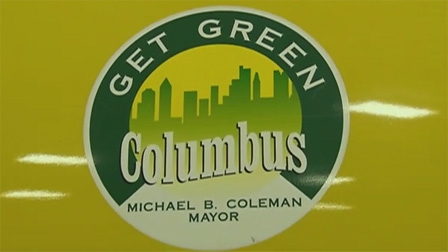