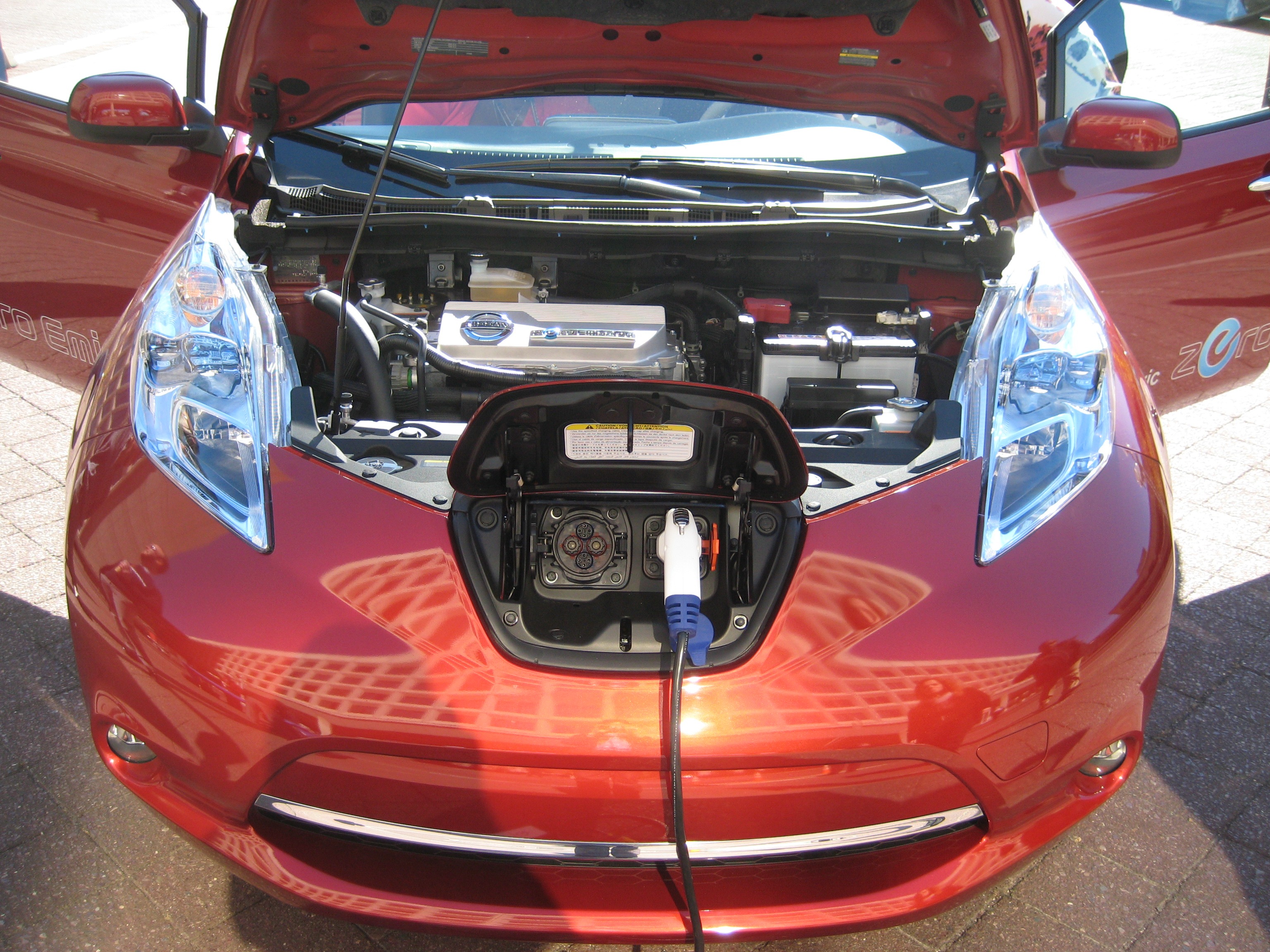 Source: Georgia Department of Natural Resources
Note: Not all models are currently available for sale in Georgia

Georgia is a national leader in plug-in electric vehicle (PEV) adoption. The "Peach State" is among the top five in the country for PEV ownership, with more than 18,000 sold through November 2014. Average monthly sales top more than 1,000 PEVs, and the majority of these vehicles tend to be sold in the metro Atlanta area.

Today, 13 vehicle models qualify for a state tax credit (discussed below), and Atlanta is currently ranked as the national leader in Nissan Leaf sales. Along with sweeping PEV sales among every major PEV manufacturer, ample and growing public charging infrastructure is also supporting PEV adoption. As of December 2014, Georgia had 260 public charging stations with more than 600 charging points.

Many new charging stations are also coming online via major PEV charging networks, such as ChargePoint, and utilities, such as Georgia Power. For example, NRG eVgo also announced plans in December 2014 to expand its charging network to include more charging stations and residential charging docks, in addition to the 20 direct current (DC) fast chargers it currently operates at 15 locations in the Atlanta metropolitan area.1 A state rebate program provided funds for an additional 40 Level 2 and four DC fast charging stations scheduled for installation in 2015 at public universities and colleges, as well as state and local government locations.2

The gains in adoption have been aided by a $5,000 state income tax credit for the purchase or lease of a zero emission vehicle (ZEV). When the tax credit is combined with the federal PEV income tax credit of up to $7,500 and other in-state incentives, such as free access to commuter lanes and reduced electricity rates from the regional utility, these vehicles become significantly more affordable and attractive to the average consumer.

However, due in large part to the popularity and high cost of the incentive to the state, many analysts predict that the Georgia Legislature will eliminate or significantly reduce the state ZEV tax credit in 2015. Attempts to amend the credit during the 2013 and 2014 legislative sessions were unsuccessful because the state's House of Representatives and Senate were unable to finalize terms before the conclusion of the session. A broad coalition of PEV supporters are working to build strong support for the ZEV tax credit and are proposing modifications intended to maintain PEV sales momentum.

"This will be an important year for alternative fuels in Georgia," said Clean Cities-Georgia coordinator Don Francis, "It will determine whether our state remains a national leader, or returns to business as usual. Much is at stake and compromise is critical."

The state ZEV tax credit—in place since 2001—is funded through the state's general fund. When the credit was enacted, the nascent PEV market provided little insight into the future growth of the industry, according to Francis.

"It was difficult at that time to imagine the diversity, affordability, and availability of PEVs on the road today," Francis said. As a result, legislation defined ZEVs as having zero tailpipe and evaporative emissions. Therefore, this included electric vehicles with drivetrains powered solely by electricity, as long as the electricity was not provided by any on-board combustion device. This definition applies only to battery electric vehicles (BEVs) and excludes other types of PEVs, such as plug-in hybrid electric vehicles (PHEVs), which also have an internal combustion engine.

The Georgia Department of Natural Resources (DNR) is the regulatory authority that manages the tax credit requests and prepares certification forms used to qualify a new ZEV purchase or lease for a tax credit.3 The certification form requires purchasers or lessees to submit information about the make, model, model year, Vehicle Identification Number, purchase date, fuel type, dealership, and owner. Once completed and submitted, the purchaser or lessee receives a ZEV certificate to submit with his or her income tax return and can claim the tax credit, which is 20% of the vehicle price up to $5,000.

With the average Georgia household paying around $1,875 annually in state income taxes, a five-year carry forward provision allows PEV customers to take full advantage of the credit. For example, a household owing $1,875 in state taxes annually would effectively not pay any state income taxes for two years and would only owe $625 in the third year. Furthermore, a household may take multiple ZEV credits, one for each qualified vehicle. Between the year 2000 and September 2014, DNR issued more than 6,500 ZEV certificates to qualified taxpayers. In tax years 2011, 2012, and 2013 combined, the Georgia Department of Revenue processed almost $15 million in state income tax credits for ZEV buyers.4

Georgia also offers an electric vehicle supply equipment (EVSE) tax credit, funded through the state general fund. The credit allows non-retail businesses to claim 10% of the installation and purchase (up to $2,500) of public EVSE over 130 volts. Qualified alternative fuel vehicles (AFVs), including PEVs, can also access Georgia High Occupancy Vehicle (HOV) lanes, regardless of the number of passengers, and also may use High Occupancy Toll (HOT) lanes free of charge. Particularly around Atlanta, where congested traffic is among the worst in the country, this access saves commuters significant time and money.

Due to the relatively low price of electricity to consumers in Georgia, PEV drivers save money on fuel. Georgia Power, the primary utility serving the state, offers a PEV-specific residential time-of-use rate that can help drivers reduce their fueling costs even further. In addition, Georgia Power announced a $12 million pilot program in October 2014 that includes an EVSE rebate program for residential and commercial customers, and the company plans to install 60 public EVSE that will include Level 2 and DC fast chargers.

In total, the financial case for PEVs is strong in Georgia, particularly for those residents motivated by value and convenience. Francis believes the tipping point for PEV sales was reached when Nissan reduced the price of a lease and local dealers broadly and aggressively marketed PEVs in the Atlanta area. Since that time, PEV sales have risen sharply. Impact of the Incentives

Supporters of the ZEV tax credit contend that the surge in Georgia's PEV sales is increasing economic development opportunities and providing significant benefit to in-state businesses and residents. Based on PEV economic impact studies performed by various research groups in other states, the Georgia Department of Economic Development (DED) prepared an economic analysis that determined the ZEV tax credit yields a net positive cash flow for the state.5 According to the DED, for every 1% of petroleum-based miles traveled in Georgia displaced by BEVs, approximately $210 million dollars will remain in the state and displace approximately 50 million gallons of petroleum fuel annually.6 This equates to approximately $2,000 in annual fuel savings for each BEV that is reinvested in the Georgia economy,7 more than compensating for the initial $5,000 tax credit investment by the state.

Compared to other states, Georgia has one of the largest tax credits, as shown in the table below, only behind Colorado, which offers up to $6,000. Georgia had the second highest number of registrations after California (which offers a vehicle purchase rebate, but not a state tax credit) with a total of 9,328 PEVs between 2010 and 2013.8

Based on information from R.L. Polk, only about half of Georgia's registered PEVs were BEVs that qualified for a state incentive.9 Though this may suggest the incentive has not significantly influenced BEV purchasing decisions, according to Francis, the number of BEVs may actually be higher. Data from the Georgia Department of Driver Services (DDS) suggests the ratio of reported registered BEVs to PHEVs was approximately 5:1 in 2013.10

In Georgia, auto dealers handle new and leased vehicle registrations, so Francis and others are educating dealers about which fuel type option to select on state vehicle registration materials to ensure accurate reporting.11 It is possible that other states may be experiencing similar data quality issues, and improved reporting practices may help elucidate PEV tax credit impacts. Regardless, it is clear that Georgia PEV sales have benefited from the tax credit and in turn the state has set the pace for PEV deployment in the country.

Despite the economic and deployment impacts of the Georgia ZEV tax credit, there are detractors who claim the credit is too expensive for the state budget, over-subsidizes PEVs to the detriment of other programs and residents, and does not pay a fair share of road use taxes. Proposed solutions include reducing the value of the credit, capping the total number of incentives the state approves annually, or eliminating the credit completely.

Proponents assert that the credit is still necessary in the short-term, but could be amended in ways that reduce the cost to the state while still supporting the industry. This may be a necessary compromise, considering that supporters would also like the definition of ZEV to be expanded to include other types of PEVs, such as qualified PHEVs. Suggested amendments to the credit include a sunset (or expiration) provision, reducing the amount of the credit, creating two different credit amounts for BEVs and PHEVs, and including road use tax requirements for PEV drivers.

It is difficult to predict what will happen if the Georgia ZEV tax credit is reduced or eliminated. Other states, such as Maryland, have amended their PEV tax credits in attempts to find the "sweet spot" for vehicle incentives with some success. Beginning in July 2010, Maryland offered a $3,000 excise tax credit for any type of PEV with battery capacity over 4 kilowatts (kW) that could plug in to an external power source. According to Maryland Energy Administration Transportation Program Manager, Chris Rice, the excise tax credit over-incentivized PEVs with smaller battery capacity and the agency issued an average of 125 credits (one per vehicle) monthly during the 2012 fiscal year.

In 2013, the Maryland Legislature also significantly reduced the credit based on three tiers of battery capacity (<10kW, 10.1-15kW, and >15kW), with a maximum credit of $1,000. Consequently, only an average of 55 credits were issued monthly. Rice believes Maryland has found a solution with its 2014 amendment, which provides $125 per kW of battery capacity, up to $3,000. An average of 78 credits was issued monthly between July and September 2014.

Georgia may also need to abate the tax credit detractors by determining if a different incentive level is appropriate for the state. It is possible that, combined with other in-state incentives—such as high-occupancy vehicle and high-occupancy toll lane access, public charging infrastructure, and utility programs—PEV sales will continue to remain high, even if incentive levels are somewhat reduced.

Regardless, PEV proponents are working diligently to prepare and provide the facts to state representatives. Committee hearings began in December 2014 and the state legislature will have 40 days to make a final determination. The future of PEVs in Georgia remains unclear, but for the time being, many PEV supporters will be watching closely.

*After the date of publication, the Georgia legislature passed House Bill 170, 2015, to sunset the ZEV tax credit on July 1, 2015, and establish an annual license fee of $200 for non-commercial PEVs and $300 for commercial PEVs. For additional details, see the Georgia Laws and Incentives page.