This station has invigorated the alternative fuels debate, proven a concept on a large scale for private enterprise, and made the air cleaner.

Opened in December 2010, the station was the first LNG transportation fueling center east of the Mississippi.

"We could not be happier with the results," Enviro Express President Bill Malone said. "This station has invigorated the alternative fuels debate, proven a concept on a large scale for private enterprise, and made the air cleaner. "Enviro Express, which provides solid waste collection services in southwestern Connecticut, is using the LNG facility to fuel 18 Kenworth Class 8 trucks that make daily trips along Interstate 95 from Bridgeport to a landfill in Putnam, 70 miles away.

In the station's first five months of operation, the trucks traveled more than 600,000 miles and used 110,000 diesel gallon equivalents of LNG. The project has reduced Enviro Express' diesel fuel use by nearly 250,000 gallons per year. The $6.2 million Enviro Express station was developed with funding assistance from the American Recovery and Reinvestment Act (ARRA) and is part of the $29 million Connecticut Clean Fuels Future Fuels Project (CCFFP), administered by New Haven Clean Cities Coalition.

ARRA funds covered half the fueling infrastructure cost, as well as the incremental cost of the LNG vehicles. CCFFP also included a substantial educational component, through which more than 1,500 fire fighters, law enforcement officers, and paramedics received training on how to handle an accident involving LNG.

Enviro Express isn't the only company benefitting from the new station. Other commercial fleets, including a local taxi fleet, use the facility for CNG fueling. And the station is attracting attention from public- and private-sector organizations throughout the Northeast who are concerned about the rising cost of diesel fuel and are looking for alternatives. 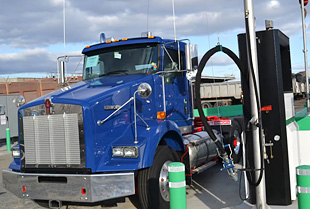