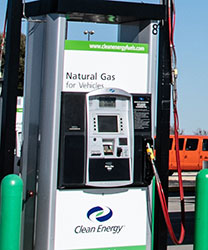 Like fossil-derived natural gas, renewable natural gas—which is produced from decaying organic materials—must be compressed or liquefied for use as a transportation fuel.

Natural gas is an odorless, gaseous mixture of hydrocarbons—predominantly made up of methane (CH4). It accounts for about 30% of the energy used in the United States. About 40% of the fuel goes to electric power production and the remaining is split between residential and commercial uses, such as heating and cooking, and industrial uses. Although natural gas is a proven, reliable alternative fuel that has long been used to power natural gas vehicles, only about two-tenths of 1% is used for transportation fuel.

The vast majority of natural gas in the United States is considered a fossil fuel because it is made from sources formed over millions of years by the action of heat and pressure on organic materials. Alternatively, renewable natural gas (RNG), also known as biomethane, is a pipeline-quality vehicle fuel. It is produced by purifying biogas, which is generated through anaerobic digestion of organic materials—such as waste from landfills and livestock—or through thermochemical processes, such as gasification. RNG qualifies as an advanced biofuel under the Renewable Fuel Standard.

Because RNG is chemically identical to fossil-derived conventional natural gas, it can use the existing natural gas distribution system and must be compressed or liquefied for use in vehicles.

CNG is produced by compressing natural gas to less than 1% of its volume at standard atmospheric pressure. To provide adequate driving range, CNG is stored onboard a vehicle in a compressed gaseous state at a pressure of up to 3,600 pounds per square inch.

CNG is used in light-, medium-, and heavy-duty applications. A CNG-powered vehicle gets about the same fuel economy as a conventional gasoline vehicle on a GGE basis. One GGE equals about 5.66 pounds of CNG.

LNG is natural gas in its liquid form. LNG is produced by purifying natural gas and super-cooling it to -260°F to turn it into a liquid. During the process known as liquefaction, natural gas is cooled below its boiling point, removing most of the extraneous compounds found in the fuel. The remaining natural gas is primarily methane with small amounts of other hydrocarbons.

Because of LNG's relatively high production cost, as well as the need to store it in expensive cryogenic tanks, the fuel's use in commercial applications has been limited. LNG must be kept at cold temperatures and is stored in double-walled, vacuum-insulated pressure vessels. LNG is suitable for trucks that require longer ranges because liquid is denser than gas and, therefore, more energy can be stored by volume. LNG is typically used in medium- and heavy-duty vehicles. One GGE equals about 1.5 gallons of LNG.

Consumption of Natural Gas in the United States