Today, CNG is a clean fuel that trucking companies in our region can choose, and we’re excited to see what the future of clean energy holds.

ACE Recycling and Disposal is one of the largest independent waste haulers in the western United States and has become known as a leader in cutting-edge green technologies. Since first adopting alternative fuels in 2008, the company’s fleet of 194 vehicles has grown to include 99 heavy-duty, compressed natural gas (CNG) refuse haulers.

"Our commitment to clean fuel technologies reduces our environmental impact, provides the best value for our communities, and tells Utah we believe in responsible business," said Matt Stalsberg, ACE owner and general manager.

To facilitate the transition, ACE applied for incentives from the state of Utah, while the Utah Clean Cities Coalition (UCCC) worked with state officials and local stakeholders to garner support. The state granted ACE with tax credits of $35,000 per CNG vehicle. The result? Today, over 50% of the company’s fleet runs on CNG, a number that is likely to increase.

ACE’s transition to alternative fuels began with a small CNG fleet that fueled at a public station, which presented initial obstacles on tank sizing and higher public fueling costs. To address these barriers, ACE constructed its first private fueling station two years later at the company headquarters, which greatly reduced fueling costs. Since then, ACE has expanded its infrastructure with two more private stations in Clearfield and West Jordan.

In addition, when ACE first struck out to expand its use of CNG, there were no time-tested standards for implementing the fuel, unlike today’s proven procedures. This was a large obstacle until 2013 when the development of high-quality fuel systems broke down a technology barrier, leading to even greater fuel savings and a highly feasible project.

One significant obstacle ACE worked with UCCC to overcome, according to Stalsberg, was the learning curve on alternative fuel technologies and common misconceptions about CNG. With the help of a shop member certified to work on CNG trucks, ACE increased education and training on CNG technology, creating a CNG mechanical safety video to address common misconceptions. Adding to the training’s success, about 50 firefighters from across Utah met for an ACE training on how to respond to emergencies involving CNG vehicles.

Implementing the technology also meant retrofitting the mechanics’ workshop due to different shop standards for CNG, a $100,000 process that took around two weeks to complete. ACE noted that the changes and safety protocols were conservative and created a safer shop overall with greater peace of mind for its employees.

ACE has advice to any fleet looking to adopt CNG: The varying national price may make the fuel more feasible in certain locations, but when it is feasible, it can lead to significant savings.

Stalsberg said that making the switch to CNG was a "no brainer" considering the net savings made possible by the investment. While CNG trucks cost more, the return on investment is three to four years for a truck that will be used for eight. These savings increase cash flow, which ACE boosted even further with the addition of their own station, by buying natural gas in bulk, and by taking advantage of tax credits by compressing their own gas.

Ultimately, adopting CNG allowed ACE to reduce fuel costs by 50%. UCCC also reported a large reduction in greenhouse gas emissions, nearly 2,440 tons over a five-year period as calculated by Argonne National Laboratory's GREET model—equivalent to driving an average passenger vehicle 5.3 million miles. Additionally, shifting the company’s fuel use resulted in an energy use impact of 2.5 million gallon gasoline equivalents, equal to the emissions reduction of removing more than 4,600 passenger vehicles from the road for a year. 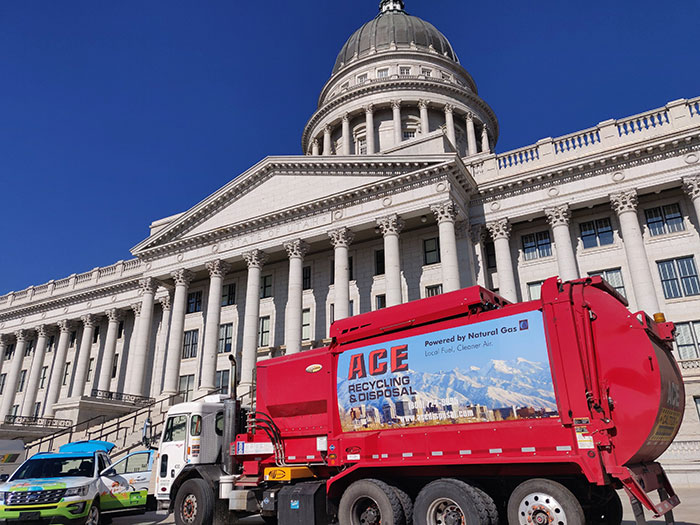