California Ramps Up Biofuels Infrastructure in 2016

Today, fuel providers are able to offer station owners turn-key packages, complete with tanks and dispensers, with a minimum of paperwork.

New renewable diesel, biodiesel, and E85 fueling pumps are cropping up across California as Clean Cities stakeholders work to expand the availability of biofuels.

In 1996, the Golden State had only one E85 station. As of 2016, it boasts more than 95 public stations, due in large part to a station-development project known as the Low Carbon Fuel Infrastructure Investment Initiative (LCF13). The project has the potential to displace 39 million gallons of petroleum and 187,500 tons of carbon dioxide emissions per year.

In addition, the project has created more than 450 green jobs in a state particularly hard-hit by unemployment. LCF13 is funded through an American Recovery and Reinvestment Act award and by the California Energy Commission and Propel Fuels. California has more than 1 million diesel and flexible fuel vehicles on the road, and LCF13 is now matching the fuels to the vehicles.

East Bay Clean Cities and other California coalitions are working with project partners like Propel Fuels and the California Department of General Services to target ZIP codes with high densities of alternative fuel vehicles and to find locations where the coalitions' fleet partners operate. Clean Cities coalitions are also coordinating with station owners to publicize the new facilities through station-opening events, ethanol buy-down days, and identification and outreach to potential fleet customers for the new fueling facilities.

Biofuels providers and Clean Cities coalitions began laying the foundation for the new fueling infrastructure back in 2007 by contacting elected officials, educating local regulatory agencies, and helping to streamline permitting processes. Today, fuel providers are able to offer station owners turn-key packages, complete with tanks and dispensers, with a minimum of paperwork. And with more stations coming on line every month, California is poised to be a global leader in the deployment of low-carbon, alternative fuels. 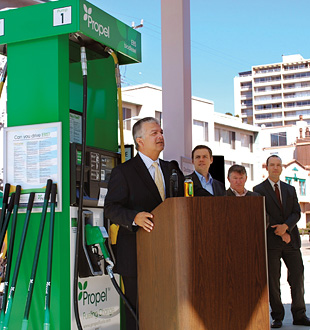