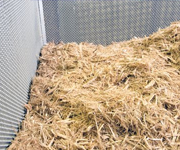 Ethanol is a renewable fuel made from various plant materials collectively known as "biomass." More than 98% of U.S. gasoline contains ethanol, typically E10 (10% ethanol, 90% gasoline), to oxygenate the fuel, which reduces air pollution.

Ethanol is also available as E85 (or flex fuel), which can be used in flexible fuel vehicles, designed to operate on any blend of gasoline and ethanol up to 83%. Another blend, E15, is approved for use in model year 2001 and newer light-duty vehicles.

There are several steps involved in making ethanol available as a vehicle fuel:

Ethanol (CH3CH2OH) is a clear, colorless liquid. It is also known as ethyl alcohol, grain alcohol, and EtOH (see Fuel Properties search.) Ethanol has the same chemical formula regardless of whether it is produced from starch- or sugar-based feedstocks, such as corn grain (as it primarily is in the United States), sugar cane (as it primarily is in Brazil), or from cellulosic feedstocks (such as wood chips or crop residues).

Ethanol contains less energy per gallon than gasoline, to varying degrees, depending on the volume percentage of ethanol in the blend. Denatured ethanol (98% ethanol) contains about 30% less energy than gasoline per gallon. Ethanol’s impact on fuel economy is dependent on the ethanol content in the fuel and whether an engine is optimized to run on gasoline or ethanol.

In the United States, 94% of ethanol is produced from the starch in corn grain. Energy is required to turn any raw feedstock into ethanol. Ethanol produced from corn demonstrates a positive energy balance, meaning that the process of producing ethanol fuel does not require more energy than the amount of energy contained in the fuel itself.

Cellulosic ethanol improves the energy balance of ethanol because the feedstocks are either waste, co-products of another industry (wood, crop residues), or are dedicated crops—such as switchgrass and miscanthus—with low water and fertilizer requirements compared to corn. When biomass is used to power the process of converting non-food-based feedstocks into cellulosic ethanol, the amount of fossil fuel energy used in production is reduced even further. Another benefit of cellulosic ethanol is that it results in lower levels of life cycle greenhouse gas emissions.

For more information on the energy balance of ethanol, download the following documents:

Ethanol Laws and Incentives by State