This is a text version of the video segment Electric Ice Resurfacers Improve Air Quality in Minnesota, which aired on Sept. 14, 2013.

JOHN DAVIS: Our success story this week takes us to Brooklyn Park, Minnesota, where ice hockey is their life with year-round hockey leagues for adults and kids. They are now practicing in a cleaner indoor environment thanks to the purchase of two electric Zamboni ice resurfacers.

STEVE LAWRENCE: We bought one, tried that out for a few years, found out it was a great benefit to us, and now we have two of them.

JOHN DAVIS: But there's more. Through a grant from the Department of Energy in partnership with the Twin Cities Clean Cities coalition, Brooklyn Park has also gone green with more than 100 of their police, fire, and other city vehicles and generators by mandating the use of biodiesel and E85 fuel.

More than 200,000 pounds of emissions are eliminated each year, keeping the stars in the north shining bright. 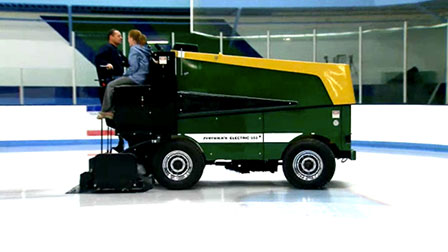