We understood that for the future, we had to look at alternative resources.

Work is under way to reduce diesel emissions along the coast of Southern California, where the country's largest port complex is deploying liquefied natural gas in heavy-duty truck fleets.

The South Coast Air Quality Management District (SCAQMD) Heavy-Duty Natural Gas Drayage Truck Replacement Program started in June 2008, with the aim of reducing diesel emissions and associated public health risks from goods movement at the ports of Los Angeles and Long Beach. Drayage trucks are used for hauling goods from the two heavily trafficked ports to regional distribution centers across Southern California. With more than 10,000 heavy-duty diesel trucks servicing the ports each year, the complex is the largest source of diesel emissions in the region, and studies by the California Air Resources Board and SCAQMD have linked port-related diesel emissions to elevated levels of cancer risks to nearby residents.

The truck replacement program, initially supported by grants from the California Air Resources Board (CARB) and the U.S. Environmental Protection Agency (EPA), as well as funds from the SCAQMD Clean Fuels Program, provides financial incentives to truck owners and operators to purchase natural gas trucks. To qualify, an owner or operator must agree to scrap its older diesel trucks and replace them with trucks that run on liquefied natural gas (LNG), thereby reducing emissions. Based on the program's initial success, SCAQMD sought additional funding from the U.S. Department of Energy (DOE), EPA, the ports, and the California Energy Commission to expand the initiative. In total, SCAQMD has been awarded about $72.78 million in funds, including a DOE award of $9.4 million through the American Recovery and Reinvestment Act (ARRA). The Recovery Act portion is helping with the purchase of 219 LNG trucks, exceeding the original award commitment of 180 trucks. The first batch was deployed in the spring of 2010, and by June 2012, 182 LNG trucks were on the road. The remaining 37 LNG trucks are expected to be deployed by the end of 2012.

Fleets that use the trucks can take advantage of several existing LNG fueling stations located in the area, including two publicly accessible stations at the Port of Long Beach.

SCAQMD has helped deploy more than 700 LNG vehicles operating at the ports and along major goods movement corridors in the region, yielding significant air quality, public health, energy security, and economic benefits. As of December 31, 2011, the deployed vehicles funded by the DOE ARRA award reported using a total of 902,982 million gallons of LNG. The fleets are required to report fuel use and other LNG truck operational data to the SCAQMD every quarter for two years after deployment of the vehicles.

All the new trucks are certified to meet or exceed the cleanest engine standards in California, including 0.2 grams per brake horsepower-hour (g/bhp-hr) NOx and 0.01 g/bhp-hr PM. SCAQMD projects the trucks' deployment to result in a greenhouse gas emissions reduction of at least 25%, relative to the older diesel trucks they are replacing. Total NOx and PM reductions for these 219 trucks are projected to be 198 tons per year and 9 tons per year, respectively. According to Barry Wallerstein, Executive Officer at the SCAQMD, "The drayage truck replacement effort has been one of the greatest clean air success stories in recent years in Southern California."

The drayage truck project has helped many independent owners and operators stay in business by reducing the incremental costs of purchasing natural gas trucks. Tighter emissions regulations have made the purchase of new heavy-duty diesel trucks an expensive proposition. But with help from SCAQMD, LNG trucks are within reach. The agency estimates that the ARRA portion of the project will create or retain a minimum of 68 jobs. SCAQMD plans to provide a final estimate of the job benefits in the first quarter of 2013 after all of the LNG trucks are on the road.

Alan Ta, Chief Operating Officer of Pacific 9 Transportation, said his company was among the earliest to embrace LNG for its 160-truck fleet. "We understood that for the future, we had to look at alternative resources. We thought LNG was a way to go," he said. Ta said the two ports offered an "amazing program." It helped Pacific 9 acquire its first 14 LNG trucks, which it uses to move shipping containers from the ports. When SCAQMD issued a later solicitation, the company applied for funding to purchase an additional four heavy-duty LNG trucks. The funds covered about $100,000 apiece for the new vehicles, which each cost $153,135. Pacific 9 obtained financing to cover the balance of the purchase price.

There was an initial learning curve for Pacific 9 owner operators, who had been used to diesel, but they quickly came to embrace the alternative fuel. Ta praised the reliability of the vehicles. "All of our LNG trucks are being used every single day," he said, noting that while about 20 trucks in his overall fleet are out of service at any given time, "the LNG trucks never sit idle. That's significant."

Pacific 9 has realized additional benefits from its participation in the SCAQMD drayage truck program: "I think there are substantial benefits in public image," he said. "As a transportation company, we're one of a few that took the lead. We decided early on to be in the forefront, and it has paid off to be recognized as a leader rather than a follower. The grant program has afforded us the opportunity," he said.

SCAQMD has conducted extensive outreach to fleets, including independent owners and operators, and held workshops and informational meetings with truck dealerships, vehicle manufacturers, and lenders to support the participation of both large and small fleets involved in goods movement. To eliminate language barriers, SCAQMD provided foreign language speakers and translation services at the workshops.</p>

The DOE ARRA award includes funding for an outreach and training program to increase knowledge and acceptance of natural gas vehicles by truck owners, operators, and technicians. SCAQMD has contracted with the five Clean Cities coalitions in the region to help supplement the outreach and education efforts. Workshops have been well attended and have successfully disseminated information on a variety of topics, including fueling infrastructure, regulations, maintenance training, funding opportunities, and the benefits of using alternative fuels.

SCAQMD has also contracted with Gladstein, Neandross & Associates and Advanced Transportation Technology and Energy, a workforce development program of California Community Colleges, to establish two outreach centers for truck owners and operators. The primary objective of the truck outreach centers is to provide comprehensive information to drayage truck owners and operators on applicable regulations, emissions control technologies, and operation and maintenance associated with each technology.

Participating fleets are helping to spread the word as well. Ta and other Pacific 9 representatives attend expos and gatherings sponsored by Clean Cities coalitions, and Ta said he talks to other fleet operators about the benefits of alternative fuels. "One thing I feel is that it's not only economics, but a chance to really support the fuel market developing in the United States." And overall, Ta said that he appreciates the Heavy-Duty Natural Gas Drayage Truck Replacement effort. "I love the program. It has gotten us to a whole different playing field in terms of carbon footprint and how customers see us." 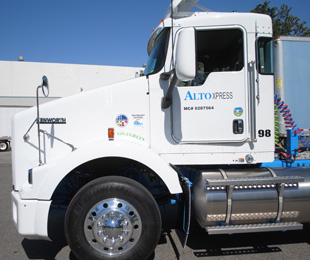